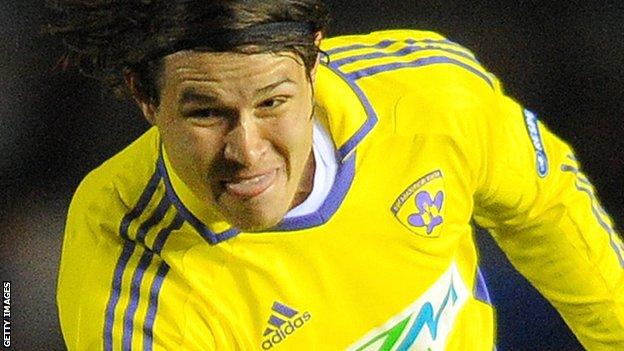 The 23-year-old will undergo a medical and join from NK Maribor on 25 July after playing in the Champions League qualifiers.

"We're really excited to be bringing in an international striker to complement our squad," said Mackay.

"Etien is a player who I tried to sign once before and keenly followed his progress with Maribor.

"We felt that the time was right to bring him to the UK and I'm looking forward to seeing his career continue to develop with Cardiff City."

Velikonja began his professional career with ND Gorica before moving to Maribor in January 2011, where he scored 20 goals in 46 appearances.

He has represented his country at Under-19 and Under-21 and made the first of his two appearances for the full side in 2009.

Mackay said Velikonja's arrival did not mean one of the current strikers would leave the club.

"I need as many players I can get in my squad," he said.

"It was a question that was ask a lot about us last season in terms of our lack of strength in depth in the squad. And it absolutely was the case.

"We started pre-season with 10 players so that fact that we've managed to sign this boy is something that's certainly going to be needed this season if we are going to challenge.