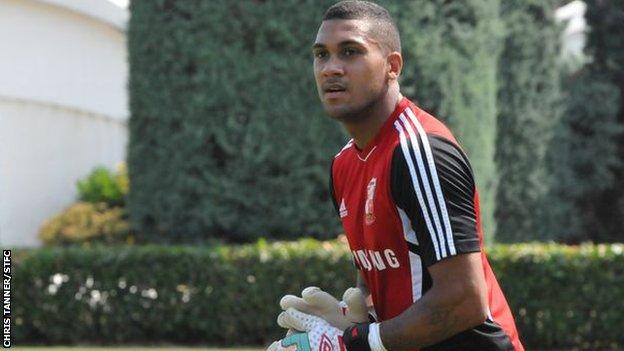 Wes Foderingham believes Swindon will sign another goalkeeper to compete with him for the number one shirt.

Foderingham, 21, has been first choice at Town since signing a permanent contract in January.

But manager Paolo Di Canio only has youngster Leigh Bedwell to call on as a reserve, following the departures of Phil Smith and Mattia Lanzano.

"I've heard they're going to bring someone in, but I'm not sure who," Foderingham told BBC Wiltshire.

"Leigh is here as well so he will compete and any competition is good."

Less than 12 months ago, Foderingham was still waiting to play his first ever league game.

It was something of a gamble when Town signed him on loan and threw him straight into the first-team on a brisk October afternoon at Accrington.

He's now established himself as one of the up and coming goalkeepers in the lower leagues.

It might be of benefit though to have another goalkeeper arrive at the club to keep him on his toes.

But the England Under-19 international says he would welcome the arrival of a new keeper.

"I need someone who is going to push me," he said.

"I can't stay relaxed. It's good to have strength and competition in places.

"When I first came I just wanted an opportunity and I got it here, but it's down to me to keep me on my toes and keep improving."