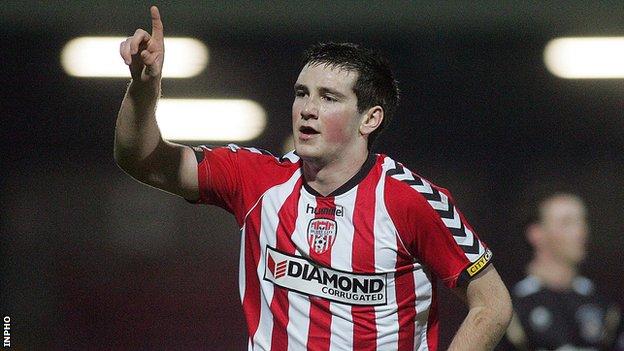 Derry City may welcome back Patrick McEleney and Barry Molloy for Friday's Airtricity League clash against leaders Sligo Rovers at the Brandywell.

McEleney has been bothered by a dead leg this week and has been unable to train but may still line out.

Molloy has returned to training after injury while recent signings Conor Murphy and Marc Brolly could make their debuts for the Candystripes.

Simon Madden and Stephen McLaughlin are both suspended for Friday's game.

McLaughlin scored the winner in last Friday's win at UCD but a fourth booking of the season means that he will sit out this week's game.

Madden was sent off at Belfield and is automatically banned for the Sligo clash.

Murphy is available following his recent transfer from Monaghan Town while Derry are hoping that Brolly's international clearance will be granted in time after his switch from Dungannon Swifts.

Sligo will be without the suspended Danny North while Richard Brush is expected to miss out because of a rib injury.

Jason McGuinness is a fitness doubt because of a hamstring injury but new signing Ryan Connolly is expected to be available.

With Derry already having something of an injury crisis, Declan Devine paraded a relatively inexperienced team at UCD and is likely to do so again on Friday night.

"We've had our problems throughout the season but the one thing you are guaranteed at this club is an opportunity to play no matter how young you are," said Devine.

In the previous league clash between the teams in April, Derry earned an impressive 1-1 draw at the Showgrounds but the Candystripes have struggled for consistency since them.

Devine travelled to Sligo last Saturday to watch the leaders stumbling to a 1-1 home draw against UCD.

"At times they were very, very good and at times Bray made them look ordinary," Devine told BBC Radio Foyle.

"When Sligo click they are very, very good so we have to make sure that we get amongst them and make it difficult for them."