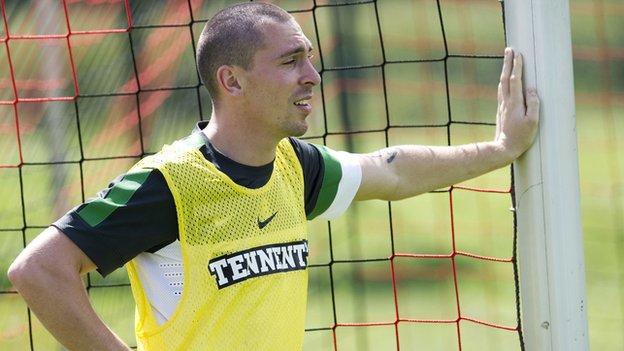 Celtic captain Scott Brown says Dundee United "could emerge as the main contenders" to challenge his side in this season's Scottish Premier League.

Rangers, who finished runners-up to Celtic last term, are no longer in the top flight after being relaunched by a different company.

And Brown feels United are well placed to compete.

"Hearts have released a lot of their players and Dundee United will take a lot of confidence from that," he said.

"St Johnstone have pretty much the same squad just now as they did last season so I think they will be another strong force.

"It will be a little bit different, but at the end of the day we still have to go out there and play every game.

"It's always hard playing at home and even harder going away to teams like Aberdeen and Hearts. We have to make sure we keep our form week in, week out."

As well as targeting a second straight SPL title, Brown is eager for Celtic to return to the Champions League group stages for the first time since 2008.

Celtic enter the competition at the third qualifying stage, with the draw taking place on 20 July.

"You don't get much bigger than that, they're the best nights you can have at Celtic Park," added Brown, who reached the last 16 of the tournament with Celtic in season 2007/08.

"I don't think many of them have played in the Champions League so they will be looking forward to seeing a full Celtic Park on those nights.

"We have struggled in qualifiers in recent years, but the players know each other a lot better now, and with the fans as well I think we can do well this year."