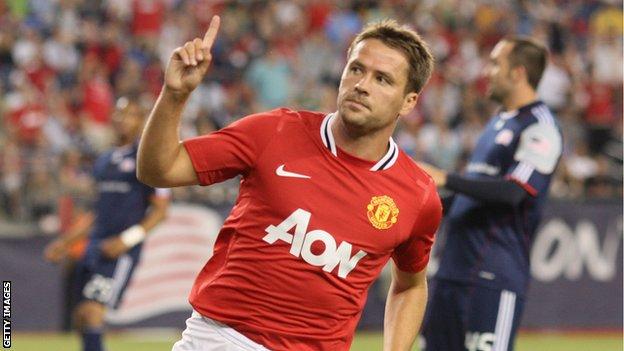 Michael Owen says he is still waiting for a "good opportunity" ahead of the new season, but has again said he will not drop down to the Championship.

Ex-England striker Owen, 32, insisted in May he would not retire despite being released by Manchester United after three seasons at Old Trafford.

"If a good opportunity doesn't come my way then so be it," tweeted Owen.

"I know I can still bang them in at the top level. I proved that nearly every time I played for Manchester United."

Owen moved to Old Trafford on a free transfer in 2009, and he scored nine goals in his first season - including the winner in his side's 4-3 victory in the Manchester derby.

His appearances became less frequent in his second year at the club, when he scored five goals in all competitions, before he netted three times in four outings last term.

He made just one Premier League appearance, however, and his last outing was in the Champions League at the beginning of November.

But Owen believes he still has something to offer in the top-flight - and he said he would not consider dropping down a division to join a Championship club.

"At this stage of my career it has to be something that I'm going to enjoy doing.

"Not being disrespectful when I say I wouldn't play in the Championship. Always said I wouldn't drop down the leagues like some have done.

"After playing for Liverpool, Real Madrid, Newcastle, Man Utd and England, I don't think I would enjoy that football."