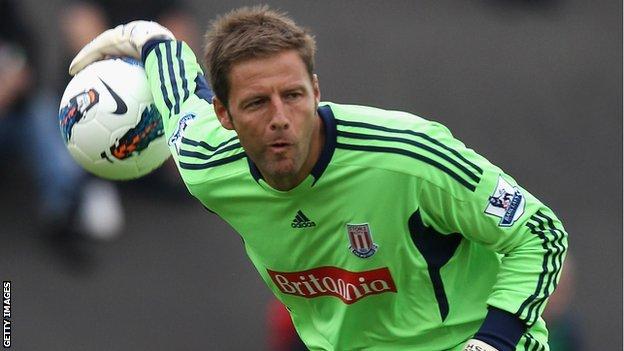 Veteran Stoke City keeper Carlo Nash has agreed a new one-year contract to remain at the club this season.

The 38-year-old will once again provide experienced back-up for international pair Asmir Begovic and Thomas Sorensen in Tony Pulis's squad.

Nash joined Stoke in July 2010 following his release by Everton but has only played one competitive game.

"It is important for us to have three top goalkeepers in the squad at this level," said Stoke City boss Pulis.

"We are as strong in that department as any Premier League club.

"At this stage of his career, it was only natural that Carlo wanted to explore the possibility of playing first-team football elsewhere when his contract expired at the end of last season, but we are delighted that he has now decided to stay here.

"He has done a fantastic job in the time he has been back with us and I have every confidence he will do a great job if he is called upon this season.

"The excellent competition which we have in the goalkeeping department can only be a good thing for all three of them in terms of pushing them to perform at the highest level, as we have seen from our keepers since Carlo rejoined us."

The much-travelled former Stockport County, Manchester City and Preston North End keeper first joined the Potters on loan for the final 10 games of the the promotion-winning 2007-08 campaign.

But, since his return to the Britannia Stadium, the form of Begovic and Sorensen has restricted him to just one Carling Cup appearance.