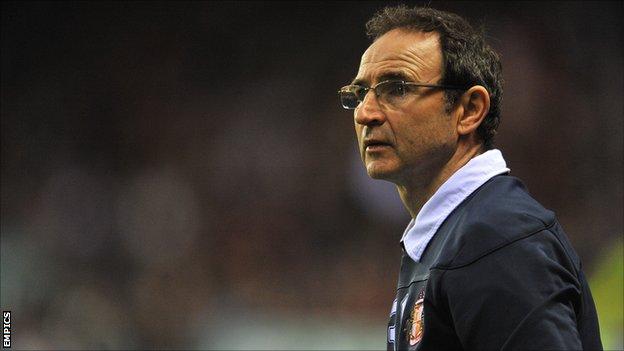 Sunderland boss Martin O'Neill has said he would like to have completed his summer transfer activity before the start of the new Premier League season.

O'Neill, who took charge at the Stadium of Light in December, welcomed a squad, including first signing Carlos Cuellar, back to training on Wednesday.

"You do have until the end of August," O'Neill told BBC Newcastle.

"But ideally it will be better if we had the players in place a little bit before the season starts."

The Black Cats have a Peace Cup tournament invitation, with games against Seongnam and Groningen or Hamburg scheduled in South Korea as part of their pre-season preparations.

Cuellar will be the sole newcomer in a squad that will be without Phil Bardsley and Matt Kilgallon, but is likely to name fringe players such as Billy Knott, who were sent out on loan to gain experience last term.

"We'll have a week there, we're bringing some of the younger players, and it gives us a chance to have a look at them," O'Neill added.

"They're training with us, and for some of the players who have been out on loan last year, it will be nice to see what improvement they've made.

"I don't imagine we will have a full house until we get back from Korea."