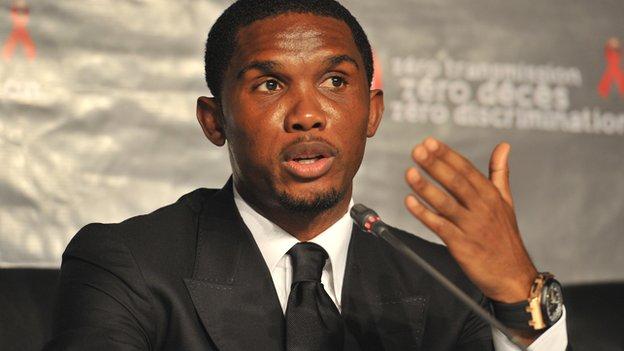 In a letter to Cameroon's football federation head Iya Mohamed, the Frenchman said the change should be made by early September.

"I request the designation of a captain and vice-captain in the national team," Lavagne wrote.

"My staff and I think it is necessary to definitively clarify the captaincy issue before our next qualifier."

"We think a working session should be held to designate the captains."

Cameroon's next competitive match is when the four-time African champions travel to Cape Verde for a 2013 Africa Cup of Nations qualifier on the weekend of 08-09 September.

Sources indicate that Kameni looks well-placed to take the captaincy on a permanent basis, with Stephane Mbia being touted as his vice-captain.

Eto'o, who assumed the captaincy in 2009 from Rigobert Song, was barred from the team by the Cameroon federation (Fecafoot) after he led a player strike in a row over bonuses last November.

His actions prompted an eight-month ban, which is due to end on 7 August.

Lavagne's letter was dated 20 June but only appeared in the public domain on Thursday.

The French coach also complained that his annual salary of roughly US$245,000 has not been paid.

He said his contract stipulated it should be paid in a lump sum.

Lavagne, who was recently warned by the federation for being disrespectful to a government minister, was appointed as Cameroon coach last year.