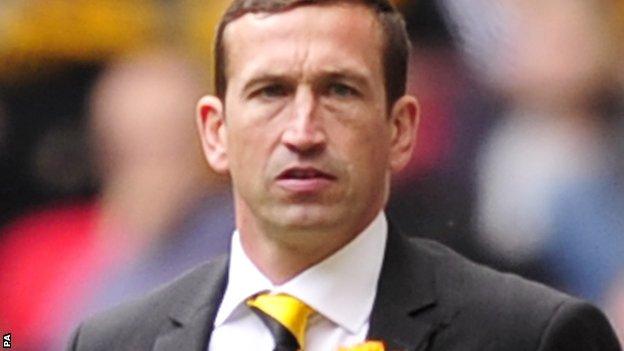 Manager Justin Edinburgh has revealed he is close to signing a new contract extension with Newport County.

Edinburgh succeeded Anthony Hudson in October 2011 and secured Conference Premier safety at the end of his first season in charge.

The ex-Spurs defender has a year of his current deal left but is set to extend his stay with the FA Trophy finalists.

"I'm in talks with the football club about extending my contract by a further year or two," he said.

"Hopefully in the not too far distant future we can return to the Football League.

"That's got to be everyone's aim but it's got to be steady and it takes time. It's slightly unrealistic for this season. We'll have a brand new team.

"What we need to be sure of this year is that we're in the top half of the table. That would be a realistic ambition and a realistic aim.

"Anything else right now would be unrealistic because you can't build championship teams overnight.

"We'll certainly be far more competitive and if we get to Christmas in the top 12 then you will assess it from there and go again."

Edinburgh says he hopes to add to Newport's squad before the start of the new season in which they will play their home games at Rodney Parade.

But Edinburgh has been busy adding to his squad with Danny Crow, Ryan Charles, Jefferson Louis, Jake Thompson, and Tony James joining the Exiles.

Defender Andy Sandell, who joined the Welsh club on a non-contract basis from Chippenham Town in January, has made the move permanent.

"I think the players I've brought to the club will make iu stronger," Edinburgh said.

"There's no doubt that we need to bring at least three more players to the football club before the start of the season.

"That's on going and the board and myself are working tirelessly and we're hopeful that we can get things in place that we can strengthen sooner rather than later."