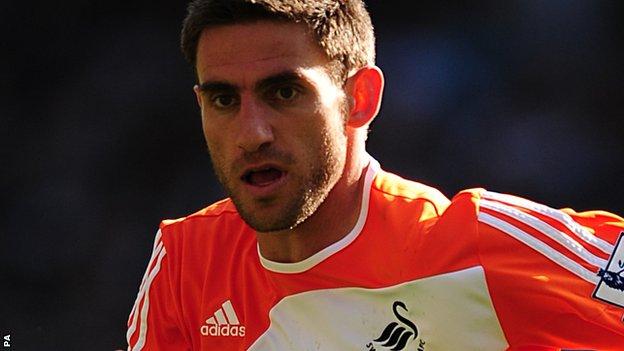 The Football Association of Wales has confirmed Swansea City defender Angel Rangel is not eligible to represent Wales.

The 29-year-old has resided in Wales for five years since joining Swansea from Terrassa in June 2007.

Rangel has made over 200 games for Swansea and was a regular in the Premier League last season.

The FAW have confirmed Rangel is not eligible under an agreement the four home nations have lodged with Fifa.

Other than birthplace, parents or grandparents players can only represent one of the home nations if they have had five years of continuous education up to the age of 18 in that country.

That ruling, introduced by Fifa in 2009, has led to England-born Crystal Palace midfielder Andy Dorman winning three caps for Wales.

Stoke City defender Ryan Shawcross, who was raised in north east Wales, is also eligible under the same ruling but has previously turned down Wales' advances.

Wales manager Chris Coleman has said he would consider approaching Shawcross but would only do so after consulting with national team captain Aaron Ramsey.

Ramsey's leg was broken in six places after a tackle by Shawcross during Arsenal's Premier League match at Stoke in February 2010.