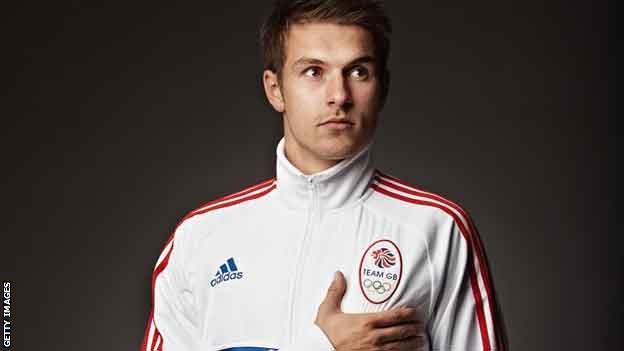 Wales captain Aaron Ramsey believes there is no threat to his nation's footballing independence as a result of his and four other Welsh players' Team GB involvement at the 2012 Olympics.

Ramsey has backed the view of GB skipper Ryan Giggs and Craig Bellamy.

Asked if he felt Wales' existence would be in jeopardy by supporting Team GB, Ramsey said: "I don't, no."

The Football Association of Wales did not want any of the nation's players involved in the team.

The Scottish and Northern Ireland governing football bodies also argued against their players' involvement in the tournament, but manager Stuart Pearce named only Welsh and English players in his 18-strong squad.

Midfielder Ramsey describes becoming Wales captain as "probably one of the proudest moments of my career" and as Team GB prepared for the Games he said: "Hopefully it will be a good experience for me.

"Obviously I haven't competed in a tournament like this before and hopefully it will be the first of a few over the years, with Wales as well… and put us in good stead for the future."

Manchester United midfielder Giggs retired from Welsh duty in 2007 and neither he nor Bellamy has played at a major tournament.

The FAW, despite its own misgivings, has pledged not to take any action against Bellamy, Ramsey, Joe Allen and Neil Taylor over their involvement.

Liverpool striker Bellamy, 32, like Manchester United veteran Giggs, 38, has captained Wales and they are two of three over-age players in a squad otherwise consisting of players under the age of 23.

After facing Senegal on 26 July, Team GB meet United Arab Emirates at Wembley on 29 July and complete their group fixtures against Uruguay at the Millennium Stadium in Cardiff on 1 August.