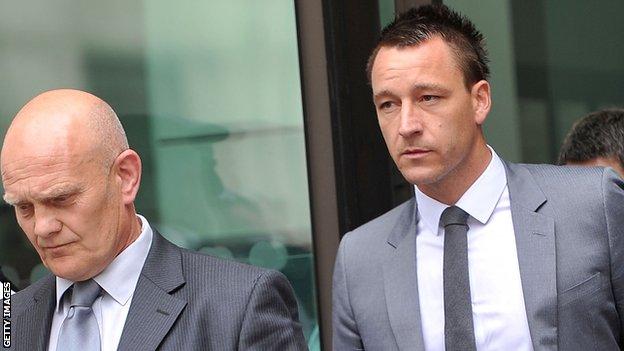 There were cheers from John Terry's supporters in the public gallery when the "not guilty" verdict at his trial was read out in Court One at Westminster Magistrates' on Friday.

Terry was impassive throughout chief magistrate Howard Riddell's judgement and, upon hearing that his name had been cleared, stood and immediately exited the dock without comment.

Within minutes he was leaving court as an innocent man, his reputation intact, his ordeal finally over.

But it had taken almost nine months for Terry's case to reach this stage.

In the intervening period it caused a chain reaction which eventually led to him being stripped of the England captaincy.

That led to Fabio Capello leaving his position as England manager in response to what he saw as interference from his employers.

The sport has also had to grapple with the key question of how prevalent racism is within its ranks.

For example, Anton Ferdinand, who Mr Riddell agreed had been "brave" in giving evidence to the court, had to endure taunts and chants from fans for the majority of last season over his role in the incident.

Police also investigated a case of "malicious communication" when it is believed a bullet was sent in a letter to QPR's training ground addressed to him.

The Football Association will now restart its own investigation into the events of 23 October 2011 at Loftus Road, with Terry facing the prospect of having to clear his name for a second time.

The FA halted its investigation once the police began their own inquiry.

But Terry's case was not the only incident of alleged racism that the football authorities had to deal with last season.

The FA handed out an eight-match ban to Liverpool's Luis Suarez after it found he had racially abused Manchester United defender Patrice Evra during a Premier League game between the two sides last October.

The Terry case therefore assumed a greater significance when set against the backdrop of concerns of a resurgence of racism, something that many felt the game had left behind long ago.

And according to anti-racism campaigner Paul Elliott, a former Chelsea player who now works for the Kick It Out organisation, Terry's case - even with a not guilty verdict - shows there is work to do.

"[Terry's case] highlighted the re-emergence of such issues [as racism in football] and we have to attack that with vigour, with education at the grassroots," he said.

"It's not helped the game. It's a sorry day for football, make no mistake about that."

The veil has been lifted on life within professional football this week.

And what has been exposed is playground taunting, name-calling and abuse that would appear to be the norm between opposing players over the course of 90 minutes.

After the verdict, there are now tough questions over how football will respond.