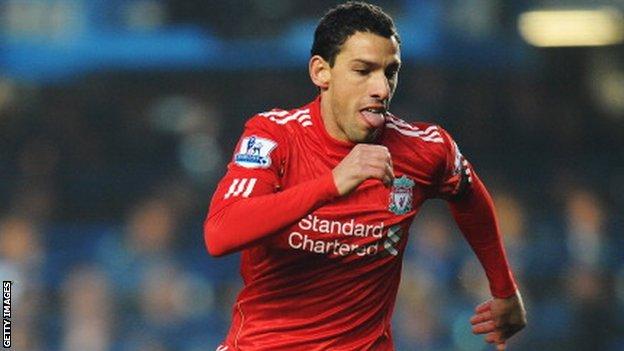 Maxi Rodriguez has left Liverpool after two and a half years to return to his former club Newell's Old Boys in Argentina.

Midfielder Rodriguez, 31, arrived at Anfield from Atletico Madrid in January 2010, and scored 17 goals in 73 appearances for the Reds.

"I'm returning home with a suitcase full of great memories," said Rodriguez in an open letter to fans published on Liverpool's official website.

"Thanks a lot for your support."

Rodriguez scored seven goals in three games towards the end of 2010-11 season, including two hat-tricks against Birmingham and Fulham

Rodriguez had one year remaining on his contract, but Liverpool have not revealed whether there was a fee involved in his return to south America.

But his departure is a setback for manager Brendan Rodgers, who was keen to keep the Argentina international at the club.

Rodriguez, who began his career at Newell's Old Boys, only featured sporadically for Liverpool last season, scoring six times in 21 appearances in all competitons.

"Before signing for Liverpool, I just saw the club as one of the greatest institutions in football," added Roriguez in his open letter.

"After my time here I can confirm that this is not just a great club, but also a great family.

"I have tried to give everything every day that I was wearing the LFC crest. It has been a great honour to defend this shirt during two and a half years."

A statement on Liverpool's website read: "Everyone at Liverpool FC would like to thank Maxi for his contribution to the club and wish him all the best for the future."