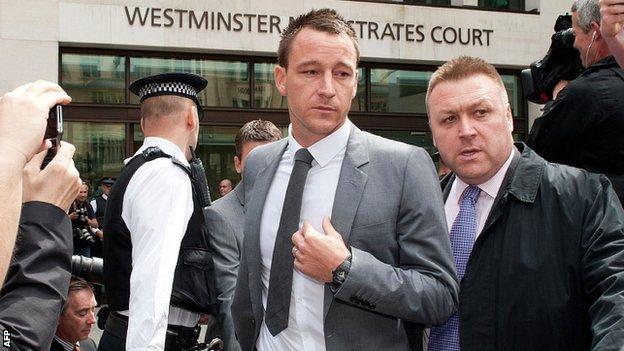 The Football Association could charge John Terry despite the Chelsea captain

Terry, 31, said in court he was repeating what he thought Ferdinand had said to him as they traded insults.

But the lower burden of proof in FA cases means that both Terry and Ferdinand could be sanctioned.

The FA said it "notes the decision in the John Terry case and will now seek to conclude its own enquiries".

Ferdinand also admitted in court that he had used insulting words towards Terry during the altercation at Loftus Road last October.

The governing body suspended its investigation surrounding the incident in November, when it became apparent that the case would go to court.

"Terry has not been charged under law but it doesn't mean he will not be charged under FA rules," said Kick it Out ambassador Garth Crooks.

"So for John Terry I'm afraid that this is only half-time."

Crooks added: "What we are talking about is the language that was used by a particular player and the question for the FA now is: is that acceptable for a professional footballer?"

In his summation of the case at Westminster Magistrates' Court, Judge Howard Riddle said that "there is no dispute that John Terry directed [racially sensitive] words in the direction of [QPR defender] Anton Ferdinand".

But in reaching a not guilty verdict, he stated it was "possible that what was said was not intended as an insult but rather as a challenge to what he believed had been said to him".

But the FA can seek to charge England defender Terry on the balance of probabilities.

It remains to be seen if repeating an allegation, as Terry's lawyers claimed, is deemed as severe as the case of Liverpool striker Luis Suarez, who received an eight-game ban and a £40,000 fine from the FA for racially abusing Manchester United's Patrice Evra last season.

That charge related to Suarez using "abusive and/or insulting words and/or behaviour" with a "reference to the ethnic origin and/or colour and/or race of Patrice Evra".

It that instance, the case did not go to court. Suarez denied using the word negro in an insulting manner.

Crooks added: "The FA need to decide whether [Terry] has broken any of their rules: ungentlemanly conduct, professional wrongdoing or bringing the game into disrepute."

Professional Footballers' Association chief executive Gordon Taylor said football's image has been tainted by the obscene language used on the pitch that was revealed during the court case.

And he also suggested the FA is in "a difficult position" over whether it charges Terry.

"It has been an unedifying process and the game has been damaged as a result of the dirty linen being washed in public," said Taylor.

"I now want to see an improvement in the [FA's] Respect campaign. It is not just the line between what is banter and what is illegal, so much of what we have heard this week needs to be cut out."

"It's the biggest game in the world and players who earn big money know the cameras and microphones are always on them and should be very mindful of what they are saying and doing."