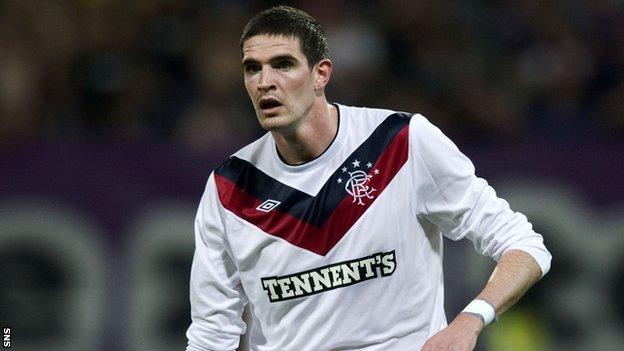 The Scottish Football Association has been urged by the players' union to act swiftly to help former Rangers stars continue their careers elsewhere.

Lawyer Margaret Gribbon made the plea after Kyle Lafferty failed to make his expected competitive debut for Sion.

The SFA has not granted international clearance for players who rejected the chance to move to the new Rangers company from the old one.

That followed an objection from those in charge at Ibrox.

We remain confident that Fifa will grant ITC (International Transfer Clearance), enabling the players to continue playing football with their new clubs

Lafferty had opted to join Sion, but the Swiss club did not include the striker in their squad for their 2-0 victory away to Grasshoppers.

Charles Green, the chief executive of the Sevco consortium that now owns Rangers' assets, has argued that those players, and others who have left but are yet to find new clubs, are in breach of contract.

But the PFA Scotland union believes its members are free agents and the matter is now in the hands of Fifa, which has written to Scotland's governing body seeking information.

Gribbon, who represents seven of the players, said: "Following the refusal of the SFA to issue players' registrations, the new clubs have all referred the matter to Fifa.

"Fifa have now written to the SFA in each case requesting reasons why the players' registrations were blocked.

"It remains entirely unclear the facts and matters upon which Rangers oldco and Rangers newco rely in order to support their position that the players acted in breach of contract.

"Presumably they have made their reasons known to the SFA and, if so, these have not been shared with my law firm, Bridge Litigation, who represent the majority of the players.

"Fifa have given the SFA seven days to respond, but it is hoped that, given the straightforward nature of the request, the SFA will be in a position to reply sooner.

"We remain confident that Fifa will grant ITC (International Transfer Clearance), enabling the players to continue playing football with their new clubs."

Green has promised to pursue the clubs signing former Rangers players for compensation.

More players are expected to leave Rangers following Friday's vote by Scottish Football League clubs to place the new club in Division Three instead of the First Division.

Rangers had to seek membership of the SFL after Green's newco was refused entry to the Scottish Premier League.