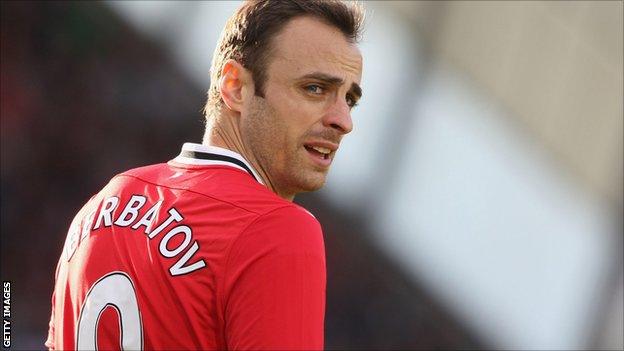 Manchester United striker Dimitar Berbatov says it is "better for everyone" that he leaves the club.

Berbatov, 31, made just 21 appearances last season, and has fallen out of favour with manager Sir Alex Ferguson.

And now the Bulgarian, who cost United £30.75m in 2008, says he would leave to go in search of regular football.

"I love this club, but I am not going to be useful to anyone if I am not playing," Berbatov wrote on his official website.

I want to play, I want to help, but for unknown reasons it's not going to happen so it's better for everyone if we say goodbye.

Berbatov scored 14 goals in his first season at United after arriving from Tottenham, and featured in the club's Champions League final defeat by Barcelona.

He found the target 12 times in his second season before finishing the following campaign as top goalscorer with 22, including hat-tricks against Liverpool and Birmingham and five in the 7-1 thrashing of Blackburn.

But last season he found himself behind Wayne Rooney, Danny Welbeck and Javier Hernandez in the fight for a starting place, and Ferguson admitted he would not be able to guarantee the Bulgarian regular first-team football.

"At 31, he is looking at first-team football," said Ferguson in March. "It is difficult for me to guarantee that so it could lead to him looking elsewhere."

Berbatov has been linked with several European clubs over the summer, but nothing has materialised and the former Spurs striker says he is desperate to sort out his future.

"I want to play, I want to help, but for unknown reasons it's not going to happen," added Berbatov.

"So it's better for everyone if we say goodbye. If not, I am professional and I will keep doing everything I can to help my team and my teammates, whenever I have the opportunity to do so."