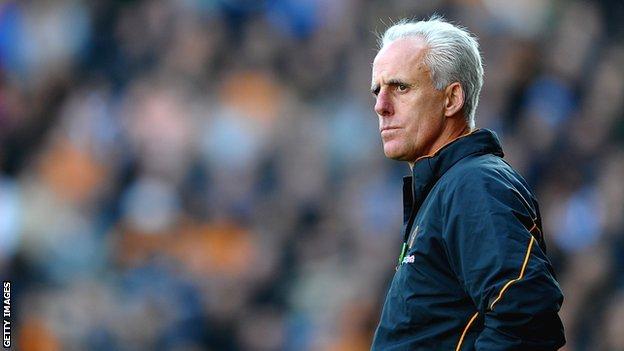 Former Republic of Ireland manager McCarthy has ruled himself out becoming the new Nottingham Forest boss.

And although the Al-Hasawi family said they would be "honoured" to work with him, he has withdrawn his interest.

Former England manager Glenn Hoddle has been installed as the bookmakers' favourite, with Gordon Strachan and Roy Keane also in the frame.

But McCarthy, who won the Championship title with Sunderland and Wolves, will not be the man to lead Forest's attempts to get back to the Premier League.

The Yorkshireman has been out of work since being sacked by Wanderers in February after their 5-1 home defeat by West Bromwich Albion.

He took charge at Wolves in 2006 and guided them to promotion to the Premier League three years later.

But he was dismissed following a series of poor results last season - including a run of 11 games without a win - with Wolves going on to finish bottom of the Premier League and being relegated to the Championship.

Abdulaziz Al-Hasawi has said the club are keen to appoint a manager who understands Championship football: "It is very important for the manager to have good knowledge of this league and the teams involved in it.

We are looking for somebody with a strong CV, with a lot of experience. We want somebody who has good, strong character to come in and inspire the players

"They must also have an understanding when it comes to working with a club and developing it."

The new Forest owners have said they are speaking to "four or five well-known figures" in football, with former Strachan, Hoddle, Keane and Peterborough United manager Darren Ferguson all thought to be in the running.

Keane's representative Michael Kennedy says the 40-year-old would be interested in returning to the club he played for in the early 1990s.

"As far as I know, he has not been approached and he has not applied for the job," Kennedy said. "But what I can say is that I think Roy would be interested if he was approached.

"He is available and I think it would be a job that would appeal to him."

Ex-Spurs boss Harry Redknapp was also linked with the vacant position, but ruled himself out of the job last week.

"We are looking for somebody with a strong CV, with a lot of experience. We want somebody who has good, strong character to come in and inspire the players," Abdulaziz Al-Hasawi added.

"We have interviewed some people on the phone but we're starting to see people face to face.

"You get a much better impression when you see them face to face. They are more comfortable and can speak more openly."