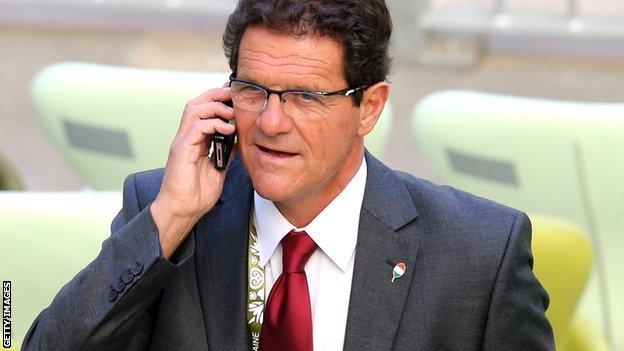 Former England manager Fabio Capello has been named as the new manager of the Russian national team.

The Italian held talks with the Russian Football Union and is reported to have signed a two-year deal in succeeding Dick Advocaat.

The 66-year-old has been out of work since leaving the England job in February and is targeting immediate success.

"My next goal - to reach the finals of the World Cup in Brazil," he said.

"After I had finished working in England, I was angry, and I wanted to continue working.

"I really want to achieve your goals and fight for the Cup in Brazil.

"I'll try to get my philosophy to match that which has brought the Russian national team success, and we will go to the World Cup in Brazil."

Capello was part of a list of high-profile names, including Harry Redknapp, who the Russian FA had targeted.

He had the highest win ratio of any England manager by winning 67% of his games, although the national team struggled at the 2010 World Cup in South Africa where they were knocked out in the last 16 stage by Germany.

He led England to qualification for Euro 2012 before resigning after the Football Association stripped John Terry of the captaincy.

During an illustrious career in club management, Capello won seven Serie A titles in Italy and another two league titles in Spain with Real Madrid. He also won the Champions League with AC Milan in 1994.