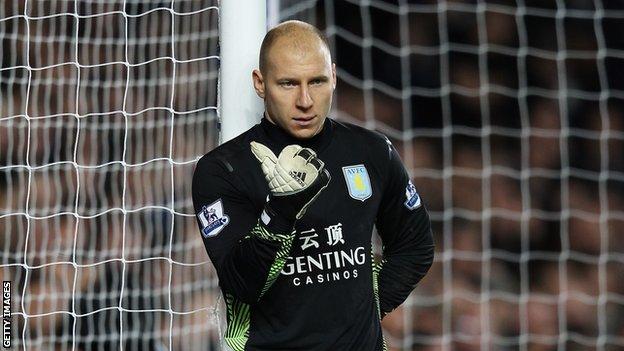 Aston Villa goalkeeper Brad Guzan has signed a new three-year deal, tying him to the club until the end of the 2014-15 season.

The 27-year-old American initially left Villa Park at the end of last season when his contract expired, prior to Paul Lambert being appointed manager.

However, Lambert has now given Guzan the chance to return to the club.

"I've watched Brad in games when he was in the team last year and he was excellent," said the new Villa boss.

Throughout his time at Villa, Guzan has been used as back-up to both Brad Friedel and Shay Given.

He made eight appearances last season when Republic of Ireland goalkeeper Given was injured. And despite often starting on the bench, Lambert says the keeper could force his way into selection this season.

"I know he's always had that stigma of being the number two behind some really good goalkeepers here," said Lambert.

"But, when you come back at the start of the season, nobody knows what's going to happen and it depends on whoever does well.

"Brad played very well the time he was in and maybe he found himself a bit unlucky to be back out."