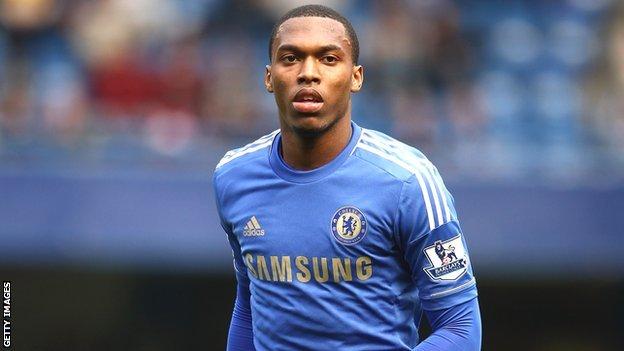 Chelsea striker Daniel Sturridge remains a doubt for London 2012 despite joining up with the Team GB squad after being treated for viral meningitis.

Great Britain coach Stuart Pearce says Sturridge, 22, will be monitored for the rest of the week.

If Sturridge is not fit, Pearce can name a replacement - chosen from one of four standby players - by 25 July.

"I have got to be 100% sure in my mind that Daniel is fit enough and can see out a tournament," Pearce said.

"There were certainly doubts because of the illness he had.

"Our fitness and conditioning people are having a look at him, to see how he will come through training. Chelsea's medical people are more than happy."

Sturridge, who scored 13 goals in 43 games for Chelsea last season, was taken ill at the start of the month but said he was "optimistic" he would recover in time for the Games.

Team GB are due to play their first game at the Olympics against Senegal on 26 July, followed by the United Arab Emirates on 29 July and Uruguay on 1 August.

Pearce's side also face Brazil in a warm-up game this Friday, 20 July, at Middlesbrough's Riverside Stadium, which will be shown on BBC One.

Meanwhile, Pearce has told BBC Sport his players are in the mood to light up the Olympics after admitting some of them were unsure how big the tournament was.

"Until you are actually in the environment you don't realise the magnitude of what we are really involved in," added Pearce.

"I think the players were unsure a little bit.

"All our group games are sold out now. Straight away that sends out a message to the team that it's not just us that know this is special.

"We have a group of players who will go that extra mile and their professionalism has blown me away.

"I'm excited to see where this journey will end."

Striker Craig Bellamy wants Pearce's side to succeed so that players from Northern Ireland, Scotland and Wales can represent Team GB at future Olympics.

The Liverpool striker, who at 33 is one of three over-age players in the squad, believes Team GB can impress the longer the tournament progresses.

"I just want to stay in this tournament for as long as possible because I know we are going to get stronger as a team," Bellamy told BBC Sport.

"I would love Team GB - only at the Olympics - to carry on because the experience it gives to other young players, and the opportunity for someone like me from Wales or someone else from Scotland or Northern Ireland is invaluable."