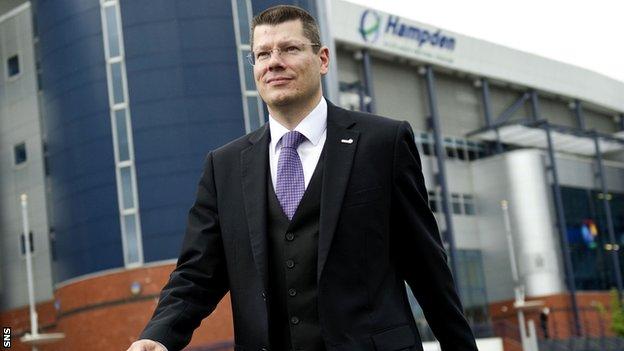 However, he repeated doubts over the commercial viability of a 16-team top flight.

"There is no question that with a 16-team league there are real issues," Doncaster told BBC Scotland.

"It's only 15 home fixtures rather than the 19 at present. And with once home, once away there are questions over the broadcasting value."

The prospect of an expanded SPL emerged in a package of reforms put to Scottish Football League clubs just two days before their vote on Rangers.

Streamlined governance, a fairer distribution of revenue and play-offs for access to the SPL were also proposed in a bid to sweeten a deal that would see the new Ibrox club granted entry to Division One.

But SFL clubs chose to admit Rangers to Division Three.

"It's absolutely still on the table," replied Doncaster when asked about the future of league reconstruction negotiations.

"Our clubs are keen to stress that they remain committed to looking at the art of the possible and making the game as strong as it can be.

"When we talked last week about league expansion we were not specific about the size of the league.

"Let's take a breath, deal with the short term issues facing us and then we can sit down with the other governing bodies and look at what we should be doing for the longer term."

With Dundee filling the vacancy left by Rangers in the SPL, discussions will resume with the league's various business partners.

Broadcasters Sky and ESPN were due to sign a new £80m five-year deal this summer but their existing £13m annual contract still has a year to run.

However, most of the SPL's commercial deals have an exit or renegotiation clause should one of the Old Firm be absent.

"As with any broadcaster or sponsor, they buy what they want," added Doncaster.

"The Sport 5 overseas deal, like the Sky, ESPN and Clydesdale Bank deals, were negotiated before I arrived in 2009.

"Having the Old Firm within what the SPL provided was clearly a key attraction for many of our partners.

"We will be working hard to discover what the commercial damage is.

"In terms of financial consequences, it's important that we work intensively over the next few days and weeks to bring clarity for the benefit of our clubs.

"We plan to get the clubs together again on 10 August and hopefully we can let them know what they can expect in terms of distributions for the season."