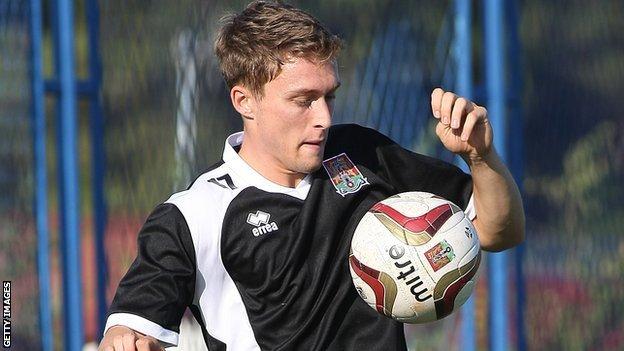 The 25-year-old did not score in 2011-12 following his arrival at Sixfields but hit three goals against Croatian side Novigrad on Saturday.

Boothroyd told BBC Northampton: "Sometimes it takes a long time to settle. He didn't start particularly well and came into a struggling team.

"There's no pressure on Jake at all. I hope [Saturday] gives him confidence."

Robinson joined the Cobblers under Gary Johnson, the summer after the club had narrowly avoided relegation.

"It's always harder when you're one of the players who's been bought to get the team out of trouble - it puts that added pressure on," said Boothroyd.

Trialist Michael Hoganson, previously with Newcastle United, also scored in the 6-1 win at the end of the squad's training camp in Croatia.

"Michael did very well. He'll be involved in the next couple of games. The other two [trialists] have moved on to other options but [Michael] has got real potential."