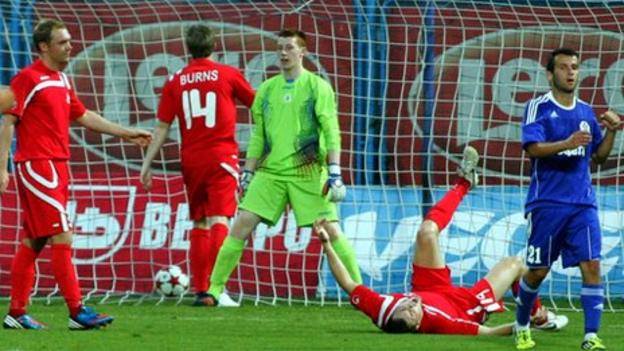 Portadown endured a difficult night in Croatia as they leaked six goals in their Europa League qualifier against NK Slaven Koprivnica on Thursday.

The problems started early for Ronnie McFall's side when Garry Breen conceded an own goal in the first minute.

Busic scored twice in the first half to give the home side a 3-0 at half time.

Rak scored a hat-trick in the second half with goals after 56, 72 and 80 minutes. Stand-in goalkeeper Jamie McArdle made a number of fine saves.

Regular number one David Miskelly missed the trip to Croatia for the second round first leg clash because of work commitments.

Although McArdle, signed recently from Tandragee Rovers, was beaten six times he also made several important saves which prevented an even bigger rout.

Kevin Braniff got the Ports' first attempt on goal in the 63rd minute and he also went close three minutes later. But Portadown will only have pride to play for when they host Koprivnica at Shamrock Park next week.