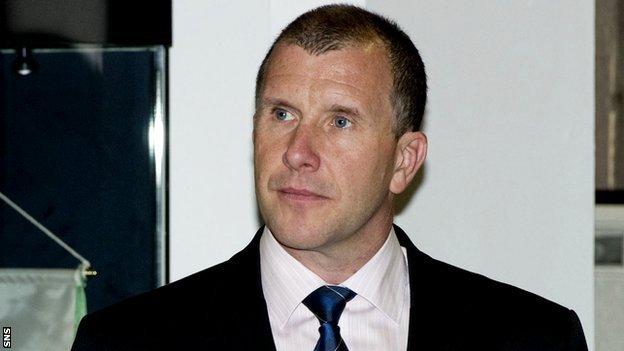 The Scottish FA has confirmed it has the power to transfer existing punishments to 'newco' Rangers.

A year-long transfer embargo and fines were handed down to the previous incarnation of the club.

Rangers sought a Judicial Review at the Court of Session, which set aside the embargo and referred the matter back to the SFA's appellate tribunal.

However, the SFA has revealed it can attach discretionary conditions to Rangers' application for membership.

Rangers received the embargo and a £100,000 fine from the SFA in April for bringing the game into disrepute.

In addition, the club was issued with a £50,000 fine for going into administration in February and a £10,000 penalty for failing to ensure that owner Craig Whyte acted within rules concerning fit and proper officials.

The transfer embargo meant the club could only sign players under the age of 18 for a season.

The statement issued by the SFA on Tuesday quotes 14.1 from its Articles of Association.

"Transfer of membership will be reviewed by the board, which will have the complete discretion to reject or to grant such application on such terms and conditions as the board may think fit," it read.

"The decision of the Court of Session to set aside the 12-month registration embargo was complicated by Rangers FC's administration and subsequent request from Sevco Scotland for a transfer of membership of the Scottish FA.

"Now that the club's status has been confirmed by the SPL and SFL, we will consider the award of transfer once Rangers FC satisfy the necessary criteria."

The SFA suggested it is seeking further clarification from Charles Green's Sevco company before granting a licence to Rangers to compete in the coming season.

Now that the club's status has been confirmed by the SPL and SFL, we will consider the award of transfer once Rangers FC satisfy the necessary criteria

Sevco provided the SFA with information on 29 June, a week after the company submitted a letter of application to take the place of Rangers after the £5.5m purchase of the club's assets.

However, the governing body is seeking further details to satisfy its newly introduced fit and proper person report.

"We have asked Sevco to provide further supplementary information and will consider that information this week," the statement continued.

"Under new Scottish FA rules, it is a requirement of the outgoing club directors to conduct a full investigation under the fit and proper guidelines.

"Given Rangers FC's insolvency event, it has been incumbent on the administrators, Duff and Phelps, to carry out the necessary checks on the proposed new directors, as well as our own investigations."

Also confirmed is the news that Rangers have asked for an arbitration panel to rule on the departure of several players who refused to transfer over to the new company.

"At the request of one of the parties in dispute, the Scottish FA, through its articles, can convene an arbitration panel, with either side selecting from a list of panel members, with the two appointees subsequently selecting a chair of the panel," added the SFA statement.

"Rangers FC have made such a request to the Scottish FA."

The statement also stated that Rangers manager Ally McCoist will face disciplinary proceedings over his call to publicly name members of the judicial panel that imposed the initial transfer embargo on the club.