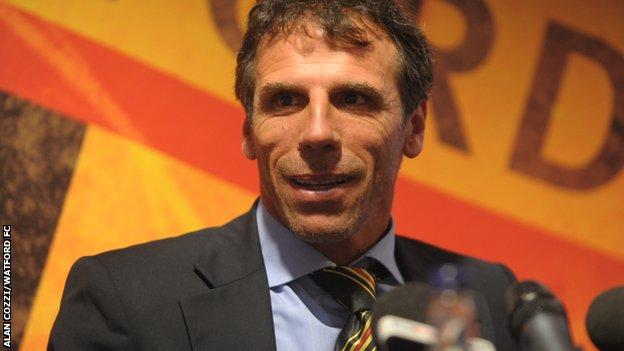 Gianfranco Zola has praised the "magnificent" response of Watford's players to his appointment as manager.

The 46-year-old former West Ham boss was put in charge following the recent takeover of the Championship club by the Pozzo family.

"What pleases me most is their willingness to accept a high volume of new information," Zola told the club's official website.

"That is a very good sign and something we can build on.

The Italian, who played more than 300 games for Chelsea during his playing career, has vowed to introduce a passing style at Vicarage Road.

"There is no compromise with that," he said last week. "It's the way I see football. I believe the club employed me because of that.

But even though money is available to strengthen the squad, Zola is not rushing to bring in new faces.

Czechs Daniel Pudil, 26, and Matej Vydra, 20, who play for Granada and Udinese - the other clubs owned by the Pozzos - are believed to be on trial at Vicarage Road.

And there have also been unconfirmed reports linking veteran former AC Milan striker Filippo Inzaghi, 38, to the club.

"We want to take what we're doing on the training ground to the pitch," Zola added.

"It may not work straight away, of course, but that is the beauty of being able to experiment."