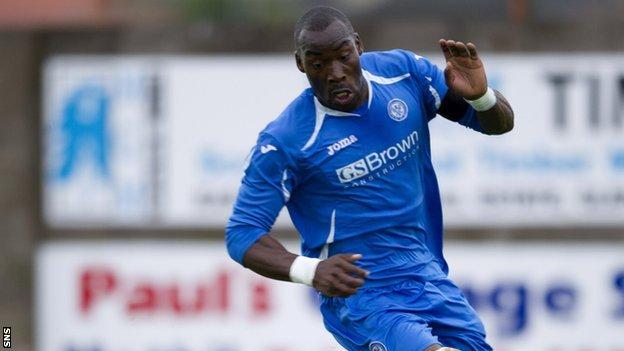 Striker Tade, who arrived from Inverness Caley Thistle, has failed to recover sufficiently from a hamstring strain picked up on Friday.

Influential and versatile defender Mackay also has an injury problem.

Saints manager Steve Lomas said: "Greg had been showing up well in training. It's a significant blow."

Tade had hoped that sitting out Saturday's 2-1 pre-season friendly win over Partick Thistle, followed by rest, would allow him to play in Turkey.

Instead, the 25-year-old will remain in Perth to receive treatment ahead of next week's second leg at McDiarmid Park.

Mackay had been handed the captain's armband after the summer exit of midfielder Jody Morris, who moved to Bristol City.

In the 32-year-old defender's absence, Saints will be captained in Turkey by Murray Davidson, the midfielder who was named vice-captain last week.

Eskisehirspor: Ersun Yanal, the 50-year-old former Turkey coach who took charge in December after leaving Trabzonspor, has had a busy summer in the transfer market as he seeks to strengthen a side that only qualified for the competition because Besiktas were banned for financial irregularities.

Belgian goalkeeper Ruud Boffin arrives in Eskisehir after the 24-year-old had his contract terminated in the summer by West Ham, having played only once for the English club since signing from Maastricht in 2010.

Somewhat more experienced is 31-year-old Turkey central defender Servet Cetin, who arrives from Galatasaray, the club with whom 24-year-old former Turkey Under-21 midfielder Mehmet Guven, who has left second-tier Manisaspor, started his career.

Coach Yanal has also added some youth to his squad with the addition of Azerbaijan midfielder Ufuk Budak, 22, signed from Freiburg, and 18-year-old midfield prospect Mehmet Erkut Senturk from Besiktas.

Austria Under-21 striker Atdhe Nuhiu, 22, has arrived on loan from Rapid Vienna, while 23-year-old Poland winger Patryk Malecki is on a temporary transfer from Wisla Krakow.

Those additions bolster a roster that already included 31-year-old Senegal international Diomansy Kamara, who will be remembered by Scottish fans for a rather fruitless loan spell with Celtic before the former Portsmouth, West Brom and Leicester striker left Fulham for Turkey last year.

The Turks have players of some pedigree in midfield and a defence that features former Genoa centre-back Diego Angelo de Oliveira and fellow Brazilian Dede, the 34-year-old wing-back previously with Borussia Dortmund and with one international cap to his name.

Defensive midfielder Alper Potuk recently made his debut for Turkey, former Portugal Under-21 playmaker Pele was previously with Inter Milan and Porto and had a loan spell with Portsmouth, while 32-year-old Chile midfielder Rodrigo Tello had spells with Sporting Lisbon and Besiktas.

St Johnstone: Gregory Tade's absence through injury is made all the more significant following the departure of last year's main strike partnership of Francisco Sandaza and Cillian Sheridan, plus Derek Riordan, who had joined on a short-term deal at the tail-end of the season.

Back-up man Marcus Haber has joined Stevenage, while Carl Finnigan moved permanently to Dundee after spending the second half of last season on loan at Dens Park and Kudus Oyenuga returned to Tottenham Hotspur after his loan in Perth.

Winger Lee Croft preferred to join Oldham from Derby after rejecting the chance of another loan spell at McDiarmid Park, defender Alan Maybury is on trial with Hibernian and midfield playmaker Jody Morris joined Bristol City.

Like all Scottish Premier League clubs, Saints' ability to sign new players or offer new contracts has been hampered by the financial uncertainty that has followed the liquidation of Rangers.

However, Jonny Tuffey, who arrived from Inverness Caley Thistle along with Tade, has been brought in to replace departing goalkeeper Peter Enckelman and will challenge Alan Mannus for a starting place in Turkey.