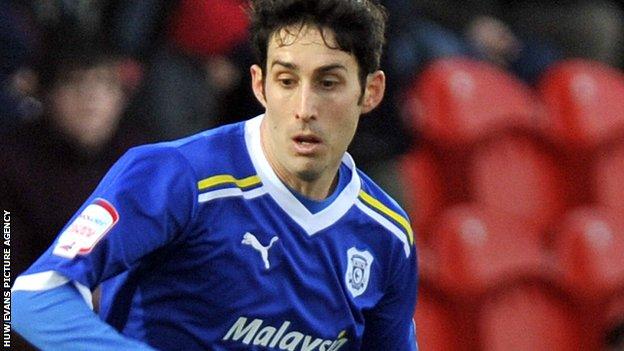 Cardiff City have insisted they will not sell their "best players" after rejecting two bids from Premier League side Fulham for Peter Whittingham.

The 27-year-old midfielder, whose contract runs until 2014, has also been linked with a move to Fulham's top-flight rivals West Bromwich Albion.

The ex-England Under-21 international, who pledged his future to the Welsh Club played every minute last season.

"We are certainly not looking to sell our best players.

"We have had two offers from the same club and rejected them both. They do not come up to our aspirations nor do we have any desire to sell Peter.

The highly rated Whittingham, who joined Cardiff for £250,000 from Aston Villa in January 2007, was the subject of failed bids from Championship clubs Nottingham Forest and Burnley in 2010 and West Ham in 2011.

Cardiff lost in the play-offs for the third year in a row last season and Whittingham helped them reach the Carling Cup final at Wembley, which they lost to Liverpool on penalties.

Whittingham scored 13 goals in 55 games and made the Championship team of the year for the second season in three years.

Cardiff manager Malky Mackay insists Whittingham is central to his plans for promotion to the Premier League, starting in their Championship opener against Huddersfield Town on Friday, 17 August.

"He is a fundamental part of the team and Malky has made no secret of the fact we want to build a team around him," added Whiteley.

"Unless Peter himself was desperate to go, it will take a very interesting offer to change our minds but this comes nowhere near it.

"They are trying to test our resolve but they are not getting very far at the moment."

Whittingham, Cardiff's 25-goal top-scorer in 2010, has scored more than 10 goals in each of the last three seasons and 64 goals in 256 appearances for the club.

Cardiff, whose Malaysian owners have pledged an overall £100m investment as the club changes its shirt colour from blue to red, have signed goalkeeper Joe Lewis and midfielder Jordon Mutch this summer.