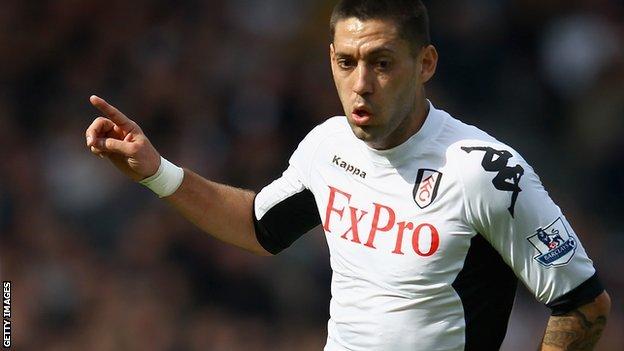 Fulham are to press ahead with a complaint to the Premier League regarding Liverpool's pursuit of their former forward Clint Dempsey.

The complaint, made in July, had been expected to be dropped after Dempsey, 29, joined Tottenham on deadline day.

But it has emerged the Craven Cottage club intend to pursue the case.

It focuses on comments made by Liverpool boss Brendan Rodgers about his club's interest in the player during the Reds' tour of Boston.

The row started when a story appeared on the Fenway Sports Group (FSG) website, claiming the United States international had joined Liverpool.

"We have received a complaint from Fulham regarding comments made by Liverpool FC officials and are looking into the matter," a Premier League statement read.

Liverpool responded to the initial complaint over Dempsey, who joined Spurs on deadline day for a fee believed to be £6m.

On the day the story appeared on the FSG website, Rodgers admitted Liverpool had enquired about Dempsey.

"Clint is a player we've inquired about, it is as simple as that," he said.

"Ian Ayre, our managing director, has spoken with the club to see what the position is. That is where we're at. He's a very talented player but we don't like to talk about other clubs' players."

Earlier in the day a post appeared on the website of the company that owns Liverpool suggesting the Reds had "added Clint Dempsey to a team that came within a game of winning the FA Cup".

Although the website is the official homepage of FSG, it is hosted by sports network company NESN.com, who posted the original story.

It was uploaded at 05:44 BST and was live for just over five hours before it was removed.

Liverpool made an enquiry for Dempsey in June but did not follow up on their interest after baulking at Fulham's asking price.

Dempsey did not feature for Fulham before his move after telling manager Martin Jol he no longer wanted to play for the club.