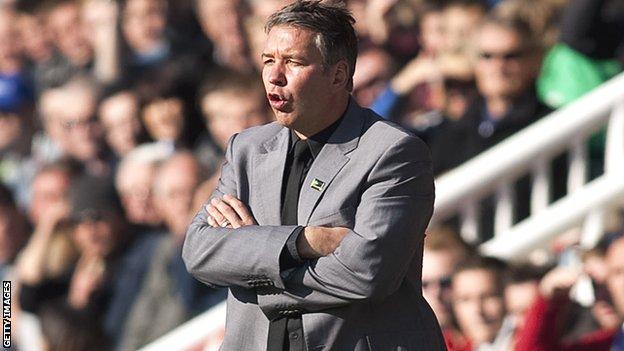 Peterborough manager Darren Ferguson has pledged his future to the club after speculation linking him with the current vacancy at Nottingham Forest.

"It's something that's part and parcel of the game, speculation," the 40-year-old told BBC Radio Cambridgeshire.

"It's not for me and that's it. I don't think anyone needs to know any more, do they? That sort of puts closure on it."

Ferguson, the son of Manchester United manager Sir Alex, is in his second spell with Posh following an unsuccessful year in charge of Preston North End.

He has guided the club to three promotions during his two spells in charge - once from League Two and twice from League One, the most recent in May last year when Peterborough beat Huddersfield in the play-off final at Old Trafford to secure a return to the Championship.

Club chairman Darragh MacAnthony recently said Ferguson deserved more recognition for his achievements and had the ability to manage in the Premier League - but added: "The time's not right."

Forest have been looking for a manager since Steve Cotterill was sacked by the club's new owners, the Al-Hasawi family, last week.

Former Republic of Ireland, Sunderland and Wolves boss Mick McCarthy spoke with the club about the vacancy but ruled himself out of the running on Tuesday.

Former England manager Glenn Hoddle has now been installed as the bookmakers' favourite, with Gordon Strachan and Roy Keane also in the frame.