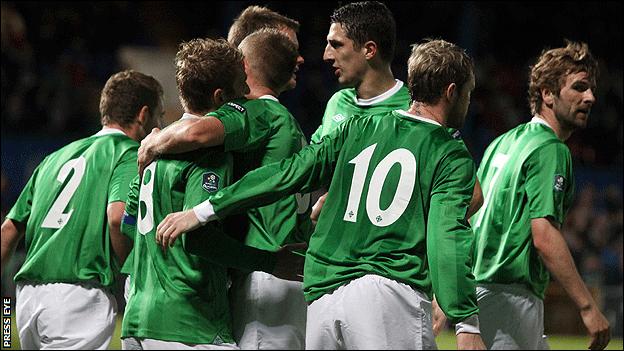 BBC Sport NI has signed a new deal with the Irish Football Association for the rights to cover Northern Ireland matches and the Irish Premiership.

For the next two years, home international games will continue to be live on Radio Ulster, with highlights on BBC television

The four-year contract covering the domestic game will see a new online programme on the Premiership scene.

The programme will launch on the afternoon of Monday, 13 August.

Final Score will also be back on BBC1 from Saturday, 11 August with results and goals from the day's games and the goals will be available that evening to watch on bbc.co.uk/sportni.

There will also be enhanced coverage of the local game on BBC Newsline.

On radio, Saturday Sportsound is also back with live coverage of the day's top game and updates from all the other grounds.

Shane Glynn, Editor Sport NI said: "BBC Northern Ireland is delighted to be renewing its partnership with the Irish FA for coverage of domestic and international football.

"At the start of a new era for the international side, with Michael O'Neill at the helm, we will have highlights of all Northern Ireland's home games for the next two years, starting with the World Cup qualifier against Luxembourg in September.

"Domestically, we will cover every game in the Irish FA Premiership over the next four years.

"This season we are going to bring fans a new feature with an online programme, Final Score 2. Featuring a presenter and expert analysis, as well the goals from the weekend matches, this will be available on our website every Monday afternoon."