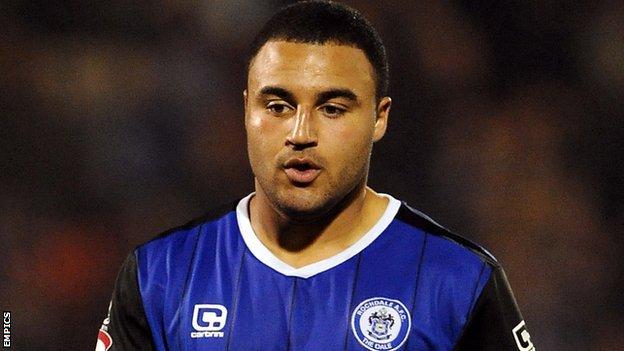 Burton Albion centre-half Marcus Holness says he would enjoy playing alongside Zander Diamond in the heart of defence this season.

The 23-year-old arrived at the Pirelli Stadium following his release by Rochdale, whilst Diamond signed for the Brewers after his exit from Oldham.

"I think we'll work well together if we do play together."

Holness played 45 minutes and scored an own goal in Burton's 2-1 defeat by an Aston Villa XI prior to signing his two-year deal.

"It wasn't the perfect start but it was the first 45 minutes against a top Premier Leagueteam, so it wasn't too bad," he added. "Obviously, the own goal wasn't brilliant.

"They must've seen something in me so hopefully I'll improve in the later games."

And the former Oldham and Barrow defender says the club's training facilities at St George's Park were a factor in his decision to sign.

"They've got a great set-upand train down at the National Football Centre, which are unbelievable facilities. After seeing that, I thought I could get used to playing on that surface," he said.

"I wasn't worried about coming [down] to League Two at all. I relish the challenge so I was happy to come here to prove my worth and hopefully get the Brewers up there."