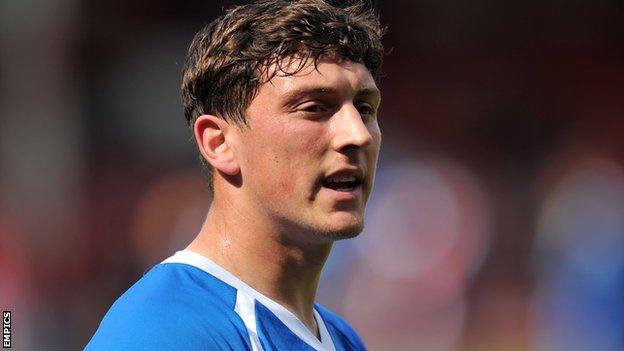 Brighton & Hove Albion defender Tommy Elphick has made his first appearance after a 14-month injury lay-off.

Elphick, who had ruptured his Achilles tendon, played 45 minutes of the pre-season game against Lewes on Tuesday.

The 24-year-old told BBC Sussex: "[The emotion] is relief more than anything. It's nice to get the first one out of the way and now I can build on it.

"I'm looking forward to recovering, seeing how the body reacts and taking it from there."

He continued: "Coming into the game, it was [a case of] trying to get through it.

"That wears off after five or ten minutes and you want to stretch yourself and do a little bit more."

The centre-back, who came through the youth ranks at the Sussex club, sustained the injury in the final game of the 2010-11 season.

It's step-by-step getting 90 minutes under my belt. The doctor, the physio and the manager will know when I am ready to step up

Elphick was forced to undergo two operations and ended up missing the whole of the last campaign, which was the club's first playing at the Amex Stadium.

As a Brighton-born player who has spent his entire career with the Seagulls, Elphick says it was hard to look on from the stands during what turned out to be a remarkable season.

"It was the worst thing I've had to do. It's just a challenge - another hurdle in my career I've got to get over.

"This is the first step at the end of the road in terms of the injury and getting back to the first team.

"It's step-by-step getting over this injury and getting 90 minutes under my belt.

"The doctor, the physio and the manager [Gus Poyet] will be the ones who know when I am ready to step up."

Elphick, who has made 182 senior appearances since his first-team debut in 2005, has expressed his thanks to everyone at the club who helped him through his recovery period.

"They've looked after me immensly," he continued. "I will be in debt to them forever.

"The medical staff have been unreal, the manager has been brilliant with me and the chairman [Tony Bloom] has given me a new contract. I owe a lot to them."