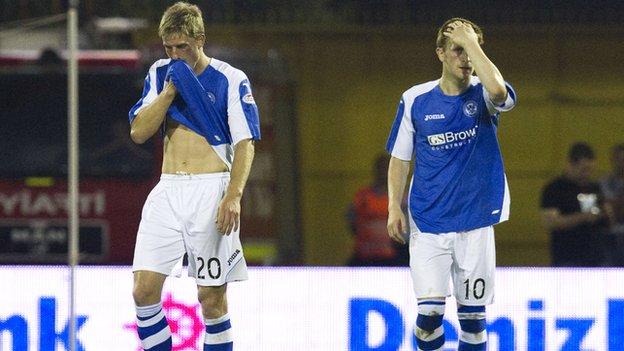 St Johnstone face an uphill struggle to reach the Europa League third qualifying round after a first-leg defeat by Eskisehirspor in Turkey.

The home side took the lead through a deflected Alper Potuk drive shortly before half-time.

A second deflected goal from Veysel Sari put the home side firmly in the driving seat.

However, a positive second-half display from the Saints will give them some hope for the return leg on 26 July.

The Perth side, minus the injured duo of captain Dave Mackay and new striker Gregory Tade, struggled with unusually high temperatures in Anatolia.

After only a minute the Turks carved out a chance when a cross from the right was volleyed just wide of the post by Patrick Malecki.

However, despite that early scare, and Eskisehirspor dominating possession, Saints limited the home side to shots from distance throughout the early period of the match.

The Eskisehirspor players claimed for a penalty as the ball appeared to strike the arm of Fraser Wright, but the referee was unmoved.

Malecki was active on the left wing for the hosts and Saints were fortunate former Celtic player Diomansy Kamara could not connect properly with a fizzing far-post cross from the Pole.

Saints manager Steve Lomas had clearly opted for a conservative formation, with only Sean Higgins up front, and a weak Jamie Adams header was the sum total of the visitors' attacking intent in the first half.

The thin blue line of the St Johnstone defence was breached five minutes before the break when Alper's shot was deflected past the stretching Alan Mannus into the bottom left-hand corner of the net.

Saints opened the second half with more attacking intent, and Liam Craig tested goalkeeper Ruud Boffin with a long-range free-kick, but it was a comfortable save for the Belgian.

Goalscorer Alper then spurned a great chance with Saints temporarily down to 10 men after Wright took a knock in the visiting box.

The forward raced past the challenge of two Saints defenders but Mannus blocked his low shot from close range.

Shortly after, however, Veysel raced in from the right wing, and his low effort from a tight angle was deflected past Mannus by the unfortunate Wright.

The visiting defence lost some cohesion after the loss of the second goal and Mannus had to look smart to save another close range effort from former Dortmund defender Dede.

Lomas changed his system as the game reached its closing stages and the visitors searched for a way into the tie.

And stand-in captain Murray Davidson almost handed Saints a last-minute lifeline when he dribbled into the home six-yard box, but his ball across the face of goal was taken off the toe of May by a defender.

The second-half display will have given Saints fans encouragement, but the two-goal deficit could prove challenging to overturn.