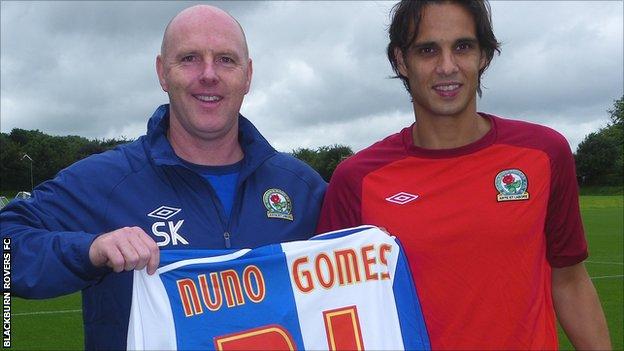 New Blackburn Rovers striker Nuno Gomes has revealed he rejected offers to move to England earlier in his career.

The 36-year-old Portugal international signed a two-year deal with Rovers earlier this month after leaving Braga in his homeland.

He told BBC Radio Lancashire: "I've received offers from England, but for one reason or another, I didn't come.

"It's nice to be here now. I'm very happy to be here at Blackburn. It's one of the historic clubs in England."

The forward, who has scored 29 goals in 79 games for his country, was once one of the most coveted strikers in European football and cost Italian club Fiorentina approximately £12.5m in 2000.

Despite being in the latter stages of his career, he is confident he can cope with the demands of Championship football and he has sought advice from Portuguese players who have been successful in England before.

"I have some friends that have played in England and I have talked with two or three of them," the veteran added. "They have said a lot of good things about the club.

"We've been working hard to be ready when the Championship starts. The Championship and the Premier League are the only places that they play like that (with a congested fixture schedule).

"Also, in Portugal, we stop for Christmas. But it's a new experience for me and I'll love it, I'm sure.

"We have good players and we're building a very good team. At the end of the season, we hope to be in the Premier League."