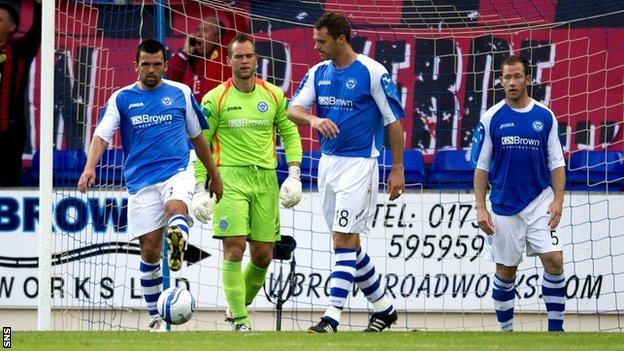 St Johnstone are out of the Europa League despite a hard-fought draw against Turkish side Eskisehirspor at McDiarmid Park.

Saints had the better of the first half and debutant Gregory Tade became an instant hero to the Perth fans when his headed goal broke the deadlock.

However, the 6,023 crowd were left disappointed as Veysel Sari equalised to ensure the visitors went through to the third qualifying round.

On a day when Japan defeated World Champions Spain in Olympic football, Saints could not cause another upset, but the club extended their unbeaten home record in Europe to six games.

Manager Steve Lomas shuffled his pack ahead of the game, bringing in new signing Tade, who missed the first leg through injury, for Sean Higgins.

Captain Dave MacKay had to make do with a place on the bench after injury had kept him out of the trip to Turkey, with Gary Miller keeping his place at right back.

For the visitors, Burhan Esir came in for Batuhan Karadeniz, while Polish winger Patryk Malecki was replaced by Rodrigo Tello.

Plenty of atmosphere was provided by the large crowd, including 241 visiting fans who had overcome visa problems to make it to Perth.

One Saints fan lofted an ironic 'Welcome to Hell' banner, which seemed even more out of place on a balmy Perth evening bathed in sunshine.

The Eskisehirspor supporters had been welcomed at a fanzone in the city centre by home fans keen to show the same hospitality they had received in Turkey the previous week.

The match began at a frenetic pace, and it showed, with neither side able to keep much in the way of possession.

However, the Turks soon began to get control of the ball, and Diomansy Kamara's cross was headed towards goal by Sari, with Alan Mannus parrying well.

Saints finally carved out an opportunity when Hasselbaink robbed the Eskisehirspor defence and cut the ball back across the edge of the box only for Chris Millar to sclaff his shot well wide of target.

Hasselbaink then latched onto a hopeful punt to burst into the box, but his flick on the bounce again slipped wide.

It was the home side's best spell of the match and they took advantage when Callum Davidson's cross from the left evaded the stretching Ruud Boffin allowing Tade to head home from close range.

With Boffin looking uncomfortable with high balls, Saints continued an aerial assault on the Eskisehirspor goal before and after the break.

However, it was from a low Liam Craig delivery across the six-yard line that the home side next went close, Hasselbaink's close-range effort parried by Boffin.

And the visitors then killed off the tie with an almost identical move.

Kamara's low cross from the left evaded Mannus and Sari tapped in at the back post, leaving Saints needing three goals to qualify.

Craig could have pulled one back for the home side but shot straight at Boffin following some neat play by Tade and Hasselbaink.

With the on-field play fizzling out, both sets of fans took to singing each others' favourite songs with the Turkish fans clearly aware of St Johnstone's rivalry with Dundee.

Despite the late introduction of youthful striker Steven May, Saints' best chance at the end came from a Craig free-kick which Boffin tipped over the bar.

The late revival did not materialise and Eskisehirspor's exuberant fans now face a trip to Marseille in the third qualifying round.

For Saints, the focus turns to the domestic campaign, but the standing ovation from the fans at full-time suggests there is no shame in their European exit.

In fact, it seems only to have whetted the supporters' appetite for more of the same.