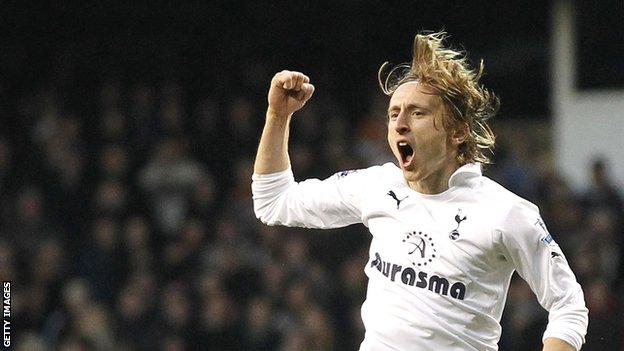 Tottenham manager Andre Villas-Boas has warned clubs chasing Luka Modric the midfielder will only be sold if their asking price of around £35m is met.

"There has been continuous interest from three different clubs," said Villas-Boas. "But it is important for Tottenham to hold onto their rights.

"His situation will continue as it is until the price is right."

The three clubs are believed to be favourites Real Madrid, Manchester United and Paris St-Germain.

Modric, who joined from Dinamo Zagreb in 2008, first expressed his desire to leave White Hart Lane 12 months ago but Tottenham rejected his transfer request at the time and also a bid from Chelsea.

The 26-year-old Croat is under contract until 2016 but Villas-Boas admitted earlier in July, Modric was likely to be on his way.

"It's fair to say that the club respects Luka's ambitions and his willingness to move on and he respects the fact that he's an important player for the club and can help us move forward," said Villas-Boas as the time.

"Ongoing discussions will continue with these clubs until we reach an agreement which is acceptable for each party."

Modric has been capped 57 times by Croatia.

"Luka is an intelligent person and understands the club has to defend his value their values, rights and interests," added Villas-Boas.

"It's a difficult situation for the club but we have been co-operative by openly saying we are willing to listen to offers.

"But the offer has not been met to what the chairman Daniel Levy wants. If that is met there won't be any problems."