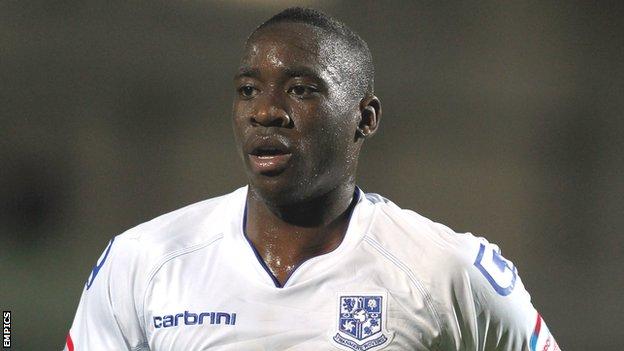 Stevenage boss Gary Smith says he has made a bid for Tranmere Rovers forward Lucas Akins.

The 23-year-old, who came through Huddersfield Town's youth system, has scored seven goals in 60 starts for the League One side.

Smith told BBC Three Counties Radio: "A bid has been submitted. He can play in midfield or up front so it would be a nice addition.

"But he's a Tranmere player and it's for them to decide where it goes."

Akins joined Scottish side Hamilton Academical in 2008 before spending time at Northwich Victoria and Partick Thistle on loan prior to his move to Tranmere in August 2010.

"I'm still looking to bring in more strikers," added Smith. "Craig Reid has got a bit of a knee problem at the moment. I think he got a bang on his knee in training, and we're light there.

"There's one or two we're speaking to and we'd like to add to the squad, but of course that takes time."

Canada international striker Marcus Haber has arrived from St Johnstone and Smith is pleased with how the former West Bromwich Albion player has acquitted himself so far.

"He's got a lot of qualities that lend themselves to an opportunity at the next level if he can add some goals to his game," said Smith. "He's a good size, very athletic, with good feet for a big man and a turn of pace.

"You don't normally get the combination of a big guy who's powerful in the air and mobile."

Stevenage were beaten 2-0 by Tottenham Hotspur in their last pre-season friendly, with trialists Nicky Ajose, Danny Shelley and Danny Carr all featuring. A deal for former Macclesfield and Norwich midfielder Matt Ball is expected by Smith imminently.

Meanwhile, Smith says he will continue to resist interest in defenders Mark Roberts and Jon Ashton.

"It's not a distraction," he said. "Mark and Jon are a strong foundation of this team.

"But there's always going to be speculation about players, especially when they've done well. At this point, I can't see them leaving."