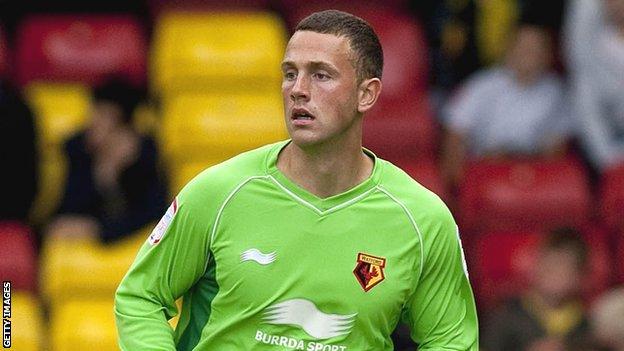 The 24-year-old has signed a four-year deal, having made 164 appearances for the Hornets and having represented England Under-21s on 14 occasions.

Watford put me on the map, gave me an opportunity and made me the player I am today

"With the squad we've got and the facilities, there's no reason why we can't be in that top six at the end of the season."

The Nottingham-born goalkeeper played for the Town academy prior to moves to the academies of Nottingham Forest and Chesterfield. He joined Lincoln as an apprentice and signed for Watford in 2006.

"It was tough [to leave Ipswich aged 12] because I'd just started secondary school and settling in," said Loach.

"Ipswich always stayed with me. When I moved back to Nottingham, I kept the Ipswich shirt while my family were wearing Nottingham Forest shirts.

"Watford put me on the map, gave me an opportunity and made me the player I am today. The new owners are there now with the new manager, it looks like the club could be going places and they deserve it."

Loach, who has the option of extending his contract at Portman Road by a further 12 months, is Paul Jewell's third summer signing after Elliott Hewitt and Luke Chambers, and will compete for the number one shirt with Arran Lee-Barrett.

"I've got to come in and show them the reason why they've bought me," said Loach.

"Arran is here because he's a great goalkeeper. I was disappointed to be dropped [at Watford] when Tomasz Kuszczak came in but I got back in at the end of the season.

"That competition is what you need. I definitely know from watching Arran and the ability he's got that he'll bring that for me."

Ipswich boss Paul Jewell revealed that he tried to sign Loach when he first arrived at the club.

"Watford were looking for a fee in the millions and we didn't take it any further," he told the club's website.

"We have been monitoring his situation during the summer and we feel we have signed a very good keeper."