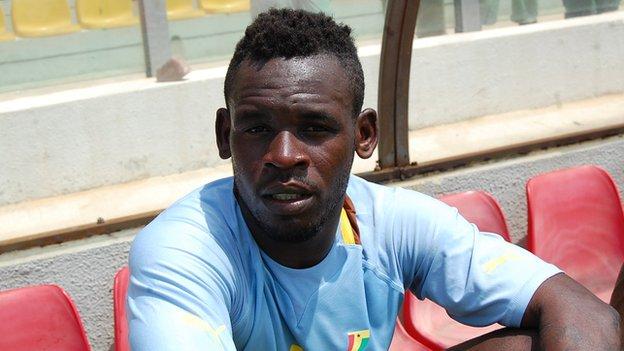 Chelsea may already be a famous name in world football thanks to the reigning European champions from England but there is another Chelsea, who are aiming for glory in Africa.

Berekum Chelsea are barely a decade old but have already won the Ghana league and are into the last eight of the African Champions League.

And the founder of the club based in the west of Ghana is hoping his team can emulate the Premier League side who they were effectively named after.

"In 2004 we formed a division three team in Berekum, it was around the time [Michael] Essien had joined Chelsea and so as a Chelsea fan I decided to name the club after them," said businessman Emmanuel Kyeremeh.

"[Roman] Abramovich had come on board and was buying players so we decided to use that same name.

Kyeremeh's financial power has earned him the nickname 'Abramovich of Ghana' in the local media for his similarities to the big-spending Russian owner of Chelsea.

He says he would love to see Berekum Chelsea emulate their English namesake and win the Champions League against the odds but he is philosophical about their chances.

"We have managed to win two away matches [in the qualifying rounds] and that gives us hope," he said.

"The other side is that we are underdogs in the group so there is no pressure on us.

"No one is expecting us to make it into the semi-finals so that helps us. We will do all that is humanly possible."

Berekum are unfazed at being drawn in a group alongside DR Congo's TP Mazembe as well as Egyptian giants Al Ahly and Zamalek and TP Mazembe; with the three clubs sharing a staggering fifteen African champions titles between them.

Berekum have already beaten Raja Casablanca 5-0 and come from behind twice to beat Zamalek 3-2 in their opening group game two weeks ago.

Ghana striker Emmanuel Clottey (pictured) was the hero against Zamalek as he scored all three goals, his second hat-trick of the Champions League and took his total to nine for the tournament.

"Clottey does not need so many chances, when he gets a chance he will take it. He is always relaxed in front of goal and that is important for us," Berekum's Dutch coach Hans Van der Plyum said.

This weekend the Ghanaians travel to Lubumbashi to play four-time champions TP Mazembe confident they can gate crash the party at the Congolese side's brand new stadium.

"That is the ambition and that is the dream," Van der Plyum said.

"We know how hectic the game will be in Lubumbashi. They are four time winners of the Champions League which is not a small thing.

"They have four or five internationals from Zambia and the boys will have that in their heads - they are ready to face them."

Chelsea top Group B on goal difference from Al Ahly and Van der Plyum says they have learned from their previous away matches.

"You don't make unnecessary mistakes because you get punished for them," he said.

"From the beginning they have called it the 'the group of death' - for me if we have a fantastic day and the opponent has a poor day we have possibilities to win the match.

"The most important thing is that you are positive minded, have the right attitude to play, not complain about the referees, focus on the match and then I know there are chances."