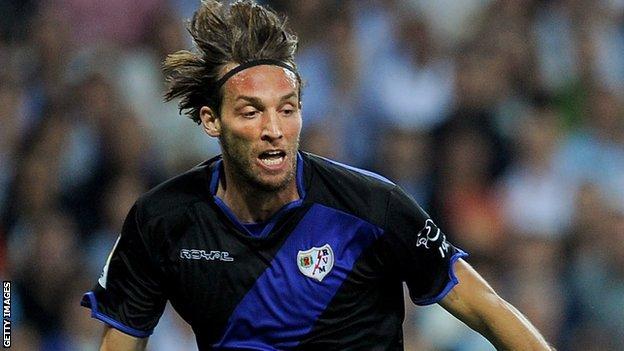 Swansea City have completed the deal to sign Michu as the Spanish midfielder has agreed a three-year contract.

Rayo Vallecano accepted a £2m bid for the 26-year-old and the Premier League club will seal a third summer signing, subject to international clearance.

Laudrup said: "We're talking about a player who scored 16 goals in a small team in the Spanish league."

Michu said: "I really wanted to come to Swansea because of the coach, the style of play and the Premier League. I had other offers.

"I've always followed the Premier League from Spain and I watched a lot of Swansea games last season. They played good football and I liked their style."

Unlike De Guzman and Flores, Michu has not previously worked with Laudrup but he said: "I also know how Michael Laudrup's teams play, so I'm looking forward to being part of that.

"The coach was fundamental to me joining Swansea. I remember watching him as a player - he was a machine."

The former Celta Vigo playmaker scored 15 goals in 37 games in his only season for Vallecano in La Liga last term.

Michu, an attacking midfielder, is seen as an ideal replacement for Gylfi Sigurdsson who, after an impressive loan spell at the Liberty Stadium last season, has joined Tottenham Hotspur from Hoffenheim.

"I am happy that the player wanted to come here because I was here," said Laudrup. "I have never worked with him and I haven't paid him!

"He has had a press conference in Madrid to say goodbye to Rayo Vallecano and he should join us for the tour to the USA."