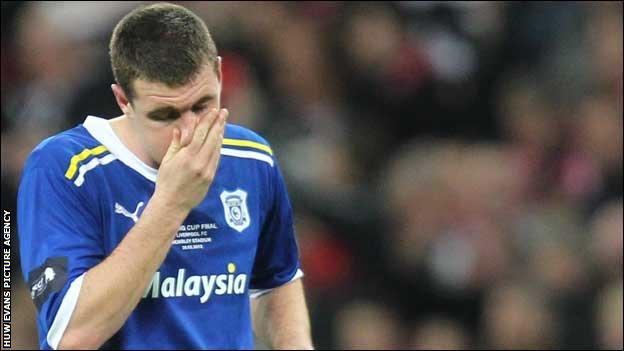 Cardiff City have turned down a bid from a rival Championship club for centre-back Anthony Gerrard.

The 26-year-old has been linked with a move to Championship new boys Huddersfield Town while Bristol City, Blackburn and Derby are interested.

Gerrard, cousin of England captain Steven, has not played since missing a vital penalty in Cardiff's Carling Cup final loss to Liverpool in February.

Gerrard has been left out of Cardiff's pre-season tour by boss Malky Mackay.

The former Everton trainee, who signed for Cardiff from Walsall in July 2009, was left behind for the trip to Switzerland as captain Mark Hudson, Ben Turner and Darcy Blake are seemingly all ahead of him in the centre-back pecking order.

Gerrard, who had spent most of the 2010-11 season on loan at Hull City, told his Twitter site: "For everyone asking, I haven't been givin [sic] a reason why I haven't gone, I'm only interested in getting fitter, so that's my main concern."