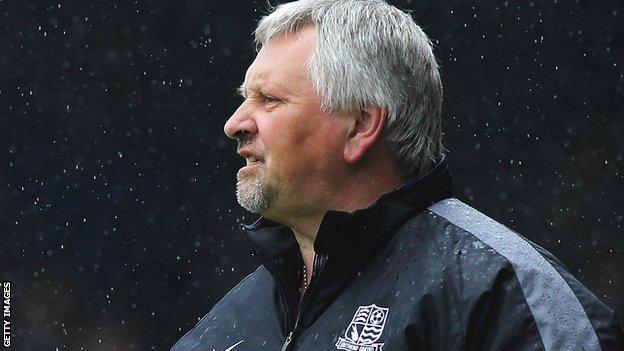 Southend United manager Paul Sturrock says his priorities are to find a goalkeeper and several midfielders before the start of the season.

The Shrimpers have won two out of three recent friendly matches but Sturrock has identified areas to improve.

He told BBC Essex: "I've got a few goalkeepers to bring in. There's plenty of time and I don't want to be rushed into getting the wrong one.

"We're crying out to strengthen with two new players in central midfield."

The Scot added: "We've got a lot of new players and a lot of trialists and trying to blend a side at the same time is very difficult.

"[The friendly match against] Ipswich will be where I'll be hoping we're up to speed. That's what we're working towards."

"A goalkeeper has got to come in pretty quickly to adapt to a new back four," Sturrock admitted.

In midfield, the Shrimpers boss cast his eye over John Spicer, Jeremy Christie and Yoann Folly in the 3-2 win over Great Wakering Rovers.

"I've had trialists again tonight, but I know the types of midfield players I want to bring to the club, so I've got to keep working away at it," he added.