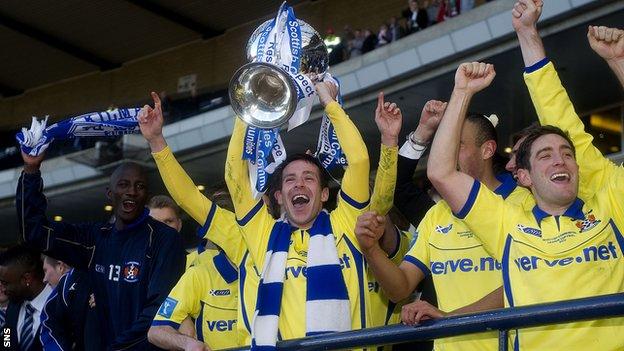 Rangers have been drawn against East Fife in the first round of the Scottish Communities League Cup.

But the newco Ibrox club are still waiting to discover if they will be granted Scottish FA membership.

Dundee will travel to Peterhead, while Raith Rovers host Berwick Rangers and Forfar are at home to Partick Thistle.

Ally has come through this period with enormous credit

The new Rangers are playing at this stage after being denied membership of the Scottish Premier League and voted into Division Three after the old club headed for liquidation.

Jimmy Sinclair, Rangers' Reserves coach, told BBC Scotland: "I am confident that the Rangers fans will back us on that day.

"It has been an unbelievable journey and many are still coming to terms with that.

"We are just delighted to be back playing football again."

Many of Rangers' top players were unwilling to remain with Rangers outside of the top flight, but Sinclair was hopeful that Ally McCoist's side could remain competitive.

"We have had kids who have come in over the last few years and done well," he said.

"The positive is it is an opportunity for them to step up to the plate.

"No-one is under the illusion that it is not going to be a very difficult season.

"It is a very competitive league with decent teams in it.

"But I am reasonably confident that what we've got at Murray Park will be able to cope."

East Fife are managed by former Rangers striker Gordon Durie and he was excited by being drawn against McCoist's side.

"It's fantastic for a small club like ours that we are going to Ibrox and the nerves are getting to me already," he told Rangers' website.

"But, at the same time, I feel so much for Coisty because this whole situation has been so difficult and distressing.

"It's amazing that it worked out this way because I said to the chairman that I really wanted Rangers at Ibrox and so it has unfolded.

"It's going to be an honour for me to lead my team out at Ibrox, but I know it will be a strange situation in many ways because of what has gone on at Rangers.

"Ally has come through this period with enormous credit. It's been a nightmare for him and it still is.

"I have a lot of difficulties being manager of a part-time team, but they are nothing to what he has gone through."

The Scottish Government is renewing its sponsorship of the tournament, with funding support of £1.7m.

And £500,000 of the money will come from the Cashback for Communities programme - the seizure of ill-gotten gains from criminals.

First round games are scheduled to be played on 4 August.

However, the Peterhead v Dundee tie will go ahead on 31 July since the Dens Park club are due to open their Scottish Premier League campaign at Kilmarnock on the Saturday.

And East Stirlingshire v Morton has been switched to 5 August due to their ground-sharing arrangement with Stenhousemuir.

Dunfermline and the SPL clubs not participating in European competition will enter at the second round stage, with Celtic, Motherwell, Dundee United, Hearts and St Johnstone joining in the third round.