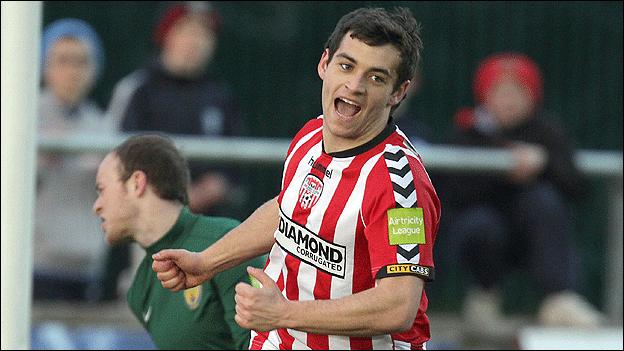 Derry City let two points slip as they conceded a late goal against Dundalk at Oriel Park on Friday night.

Chris Shields was left unmarked to head in Dundalk's 85th-minute equaliser after a corner into the near post had been flicked on.

David McDaid shot into the lead on 74 minutes when Dermot McCaffrey exchanged passes with Stephen McLaughlin before pulling the ball back for the scorer.

McLaughlin hit the bar with a shot in the 55th minute and later hit a post.

Just before going behind, Dundalk felt they had taken the lead but the officials ruled that Rob Waters's header had not crossed the line.

It was a frustrating end for Derry who had slipped into the bottom half of the table after a run of poor results.

The Candystripes had had the better of the first half with McDaid hitting the bar from close-range in the 29th minute after McLaughlin had whipped the ball in.