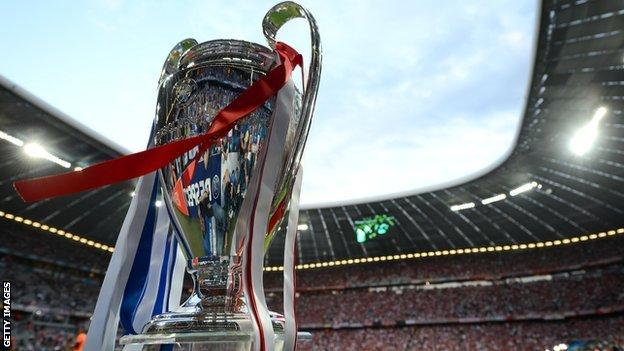 Celtic are likely to face HJK Helskinki while Motherwell will make their Champions League debut against Panathinaikos after the draw for the third qualifying round.

The first leg of the tie will be played at Celtic Park on 31 July or 1 August.

Motherwell will host the Greeks in their first leg on 31 July.

Our opponents will be sharp and fit, so we have to make sure we reach that stage over the course of our next few friendlies

The Athens club have won 20 Greek titles and reached the final of the European Cup in 1971.

Panathinaikos qualified for the Champions League after finishing second behind their great rivals, Olympiacos, in the Greek Superleague last season.

Former Rangers defender Jean-Alain Boumsong signed for the club in 2010, while 120-times capped Greece international Giorgos Karagounis plays a key midfield role for the side.

The Ibrox club edged past Panathinaikos on the away goals rule on their way to the 2008 Uefa Cup final.

Motherwell manager Stuart McCall is pleased that his side will host their first-ever Champions League tie, with the return leg the following Wednesday at the Olympic Stadium in Athens.

"Delighted to be at home in the first leg," he said. "That was key to me.

"That's all I was hoping for because, with all the other sides we could get, we'd be huge underdogs against as they are full of international players.

"It's exciting times and hopefully we can fill Fir Park when it comes around."

Well goalkeeper Darren Randolph revealed his excitement at the draw and also said he was confident the Lanarkshire side could progress to the next phase.

"It's a very good draw. There were a lot of smiles and happy faces when we found out this morning," he told BBC Scotland.

"I think everyone's very confident, especially with the first leg being at home.

"When you look at the European Championships, most of the Greek team either played for Panathinaikos or Olympiakos, so its good to get to play against that calibre of player."

Celtic's likely opponents, HJK, won their 24th Finnish league title in 2011 and currently sit second in the table after 17 matches of the current campaign.

The Scottish champions' manager, Neil Lennon, told his club website: "Our opponents will be sharp and fit, so we have to make sure we reach that stage over the course of our next few friendlies.

"We know it will be difficult, but we will do as much preparation for it as we possibly can.

"We're delighted to be in with the chance of qualifying for the competition and we are looking forward to it.

"The boys have been working hard while they were in Germany and now we are in Holland for the friendly against Ajax.

"That will be a good test for us and so will the next two home games against Norwich City and Inter Milan.

"We will continue to work hard and hopefully it will pay off in the qualifiers because the Champions League is where we want to be."

Former Hearts striker Juho Makela is joint top scorer for HJK this season with six league goals and a hat-trick in the match against KR.

In Celtic's previous meeting with HJK, Henirk Larsson netted twice in Glasgow, while Paulus Roiha did the same for the Finns in the second leg.

Chris Sutton grabbed an extra-time goal for the visitors to win the tie.