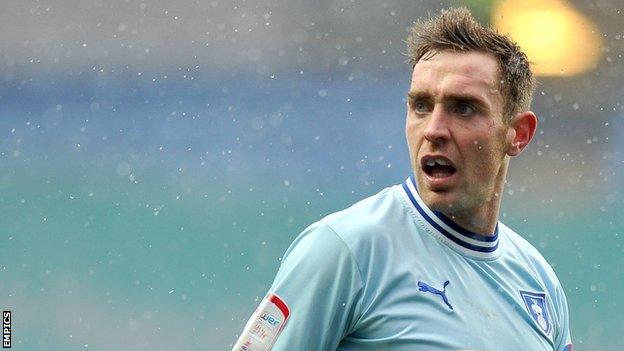 Derby County have signed Coventry City centre-half Richard Keogh for a fee believed to be in excess of £1m.

The 25-year-old has signed a three-year contract and the deal also sees Rams striker Callum Ball move to Coventry on a season-long loan.

Keogh is a replacement for Jason Shackell, whose sale to Burnley provoked an angry response from fans.

He's young, he's hungry and he's already a big, strong striker and we think he will be a massive asset for us this season

Derby manager Nigel Clough said Keogh was an "important signing" and will captain the side this season.

Skipper Shaun Barker will miss the entire season with a knee injury.

Clough added: "We've done our homework on him for a long period of time.

"Everyone knows we have been looking to strengthen the central defensive area of the team and we believe Richard fits the bill in every respect, so we're delighted to get one of our top targets on board.

"Despite Coventry's relegation last season, he was a commanding presence at the heart of their defence and he has both very good leadership qualities and the right sort of attitude to fit into our squad."

Keogh, City's captain last season, is mainly a centre-half but can also play at full-back and was also being chased by Cardiff City, Leeds United and Bristol City.

The fee is believed to the biggest Derby have paid out in three years and eclipses the amount paid for both Barker and Shackell.

Keogh joined the Sky Blues in June 2010 and played 95 games in two seasons.

He is Derby's third summer signing following the capture of Michael Jacobs and Paul Coutts.

Coventry boss Andy Thorn was thrilled to sign 19-year-old Ball: "I've liked Callum for some time so I am really pleased we've been able to get him here.

"He's young, he's hungry and he's already a big, strong striker and we think he will be a massive asset for us this season.

"He played 23 games in the Championship last season and he will fit in with what we want to do here."