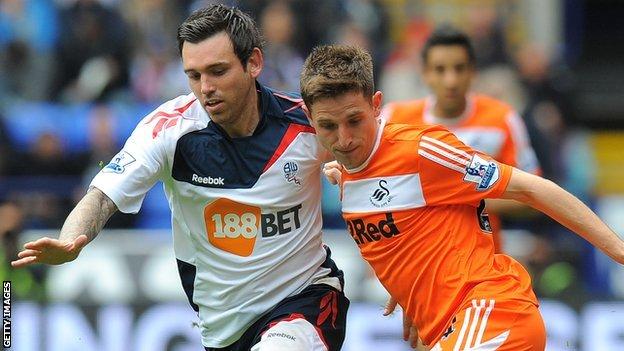 Swansea City have had a £4m bid for Bolton midfielder Mark Davies rejected by the Lancashire club.

Swansea have confirmed their interest in Davies, 24, who was relegated to the Championship along with the Trotters at the end of the 2011-12 season.

But Swansea have refused to confirm or deny making any bid for Davies.

Bolton boss Owen Coyle had previously stated Davies, among others, is not for sale.

When asked about Davies last week, Swansea manager Michael Laudrup gave the impression of being cautious.

"I have to know more about him. I've seen him in one game last year," he said.

"His team have now been relegated to the Championship so I really have to think about that.

"We have to be very careful and sure about what we're doing because it's a very important position."

Bolton boss Owen Coyle had previously stated Davies, among others, is not for sale.

In July, Coyle told told the Bolton News he wanted Davies to knuckle down and prove himself next term.

"He [Davies] needs to get himself as fit as he possibly can this pre-season and then go and show the world what a great player he can be." said Coyle.

Laudrup succeeded Rodgers as Swansea manager and has begun to freshen up their squad.

A deal to sign striker Itay Shechter on a season-long loan from German side Kaiserslautern is also about to be finalised.