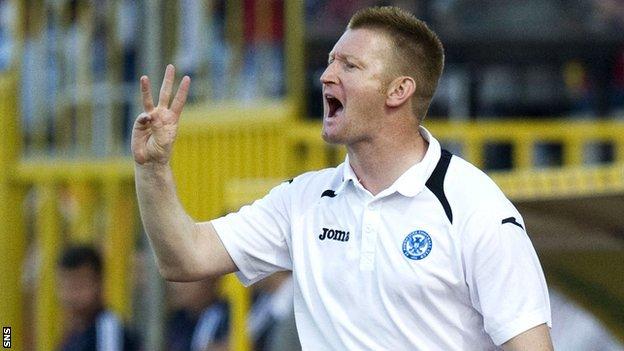 St Johnstone manager Steve Lomas has bemoaned the deflected goals which led to defeat by Eskisehirspor in the Europa League second qualifying round.

Goals from Alper Potuk and Veysel Sari gave the Turkish side a 2-0 home victory.

However, a second-half rally from the visitors gave Lomas come encouragement for the second leg in Perth on 26 July.

"I thought we contained them and obviously two deflected goals is a cruel blow," he said.

"The lads stuck to their game plan and we were never going to be able to come here and play open and attacking football because Eskisehirspor are a very good team with a lot of good players.

"I was disappointed for the lads, I thought they put in a manful effort.

"Sometimes you get a bit of luck but tonight we didn't."

However, the Northern Irishman felt that if Saints were to get the rub of the green in the second leg, then the tie was not beyond them.

We know it is going to be very hard but it is still alive, if we get a goal who knows?

"We know it is going to be very hard but it is still alive, if we get a goal who knows?," he said.

"I thought the lads were magnificent, one to 11 and the subs I thought. We worked on a game plan and stuck to it.

"But for two deflections, I didn't think they had too many efforts on goal which is credit to the lads' resistance.

"If we get the first goal (in the second leg) it is all to play for."