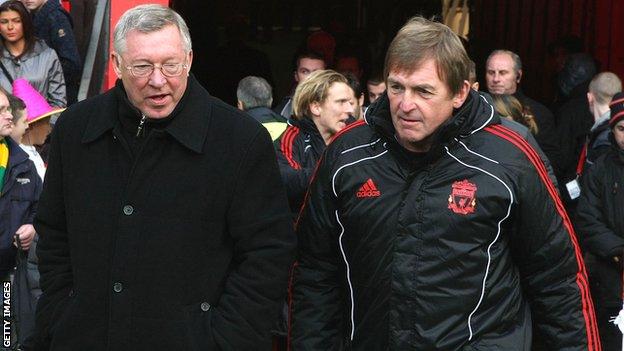 Dalglish, who left Anfield in May, supported Suarez despite the Liverpool striker being found guilty of racially abusing United defender Patrice Evra.

"Their owner John Henry has obviously looked at that [incident] and felt it wasn't handled in the right way."

Ferguson added: "It certainly wasn't a nice thing to happen and it must have been part of it."

Suarez was handed an eight-match ban and fined £40,000 after an investigation into his confrontation with Evra during the 1-1 draw between Liverpool and United at Anfield on 15 October.

Liverpool chose not to appeal the punishment, but Dalglish maintained the Uruguay international was innocent.

Suarez then refused to shake hands with Evra before Liverpool's 2-1 defeat in February, and Dalglish reacted angrily to questions about the incident after the game.

The striker and Dalglish later apologised for their part in the handshake row after the direct intervention of Liverpool's US owners.

Dalglish was sacked, despite winning the Carling Cup and getting to the final of the FA Cup, after finishing eighth in the Premier League.