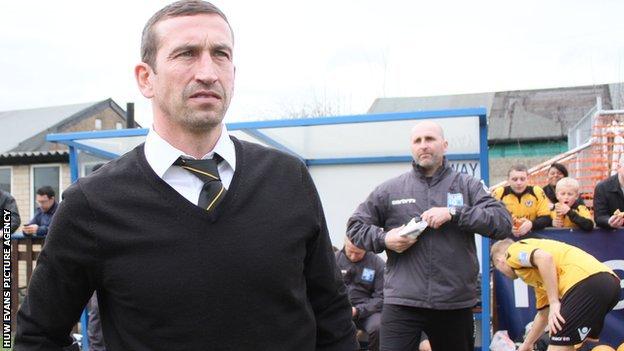 The new deal takes the 42-year-old to the end of the 2013-14 season with the Blue Square Premier Club.

"I am very pleased to commit to Newport County AFC which I firmly believe is heading in the right direction both on and off the pitch," said Edinburgh.

The club's announcement comes a day after chairman and director Chris Blight resigned after 10 years service to the club.

Blight oversaw County's promotion to the Conference and their upcoming move from the council-owned Spytty Park home to groundshare with the city's rugby teams at Rodney Parade.

He hinted that abuse directed at him by some disgruntled fans may have been a factor in his decision to leave.

Blight played a key role in attracting Edinburgh to the club in 2011 after Hudson was sacked only 19 games into his reign.

Edinburgh, the former Spurs defender who won the FA Cup and League Cup during his time at White Hart Lane, had one year left on his County deal.

He had suggested he could be prepared to sign a two-year extension but has committed to just one more year.

"There is an excellent fan base at the club and we are looking forward to the coming season at our new Rodney Parade home," he said.

"I would like to take this opportunity to thank everyone at the club for their continued support."